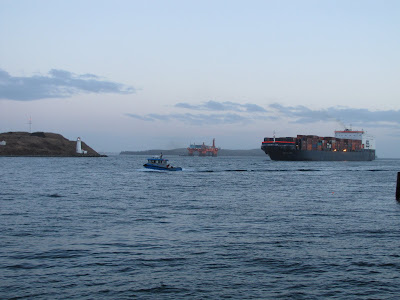 The Port Authority workboat Maintainer I heads north in advance of the Atlantic Cartier, while TSS Chemul sits at anchor Monday December 27. Despite the rather serene looking scene, there was a brisk wind and a strong swell, the remnants of another major storm that passed over earlier in the day.

Bad weather on Sunday/ Monday played havoc with work on the offshore rig Chemul. After successful sea trials last week, the rig returned to Halifax Harbour and anchored on December 23. That was a tricky operation for the harbour tugs which had to connect up to the rig off the pilot station. However the rig was handed over by Halifax Shipyard to PEMEX, (Petroleos Mexicanos) on Friday December 24, following the multi-million dollar refit.
There is other work minor work to do in preparation for the rig's departure, which is scheduled before year's end. Two tugs (from Harms Bergung Transport) Centaurus and Pegasus are due December 29.
The storm that went through on December 26 and 27 prevented some of that work from being done (see Tugfax) but also prevented people from safely boarding the rig from boats. I also hear there were other issues, including station keeping (positioning) resulting from wind and seas during the storm.
.
Posted by Mac at 11:13 PM