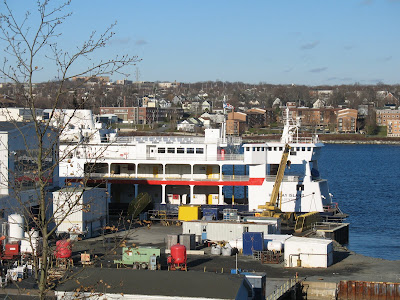 1. The 39 year old Holiday Island is curently in refit at Halifax Shipyard. November 28, 2010 photo. (She is a double ender, so the half that's not in the photo is the same as the half that is.)

A short life line has been thrown to three Atlantic Canada ferry services with a three year, $51 mn announcement from Ottawa.

The Minister of Transport owns both Princess of Acadia and Holiday Island which must be replaced with new ships. These should be purpose built and need to be in place, or at least ordered by the time the current subsidy arrangement ends.

The subsidy for the Magdalen Islands operation also extends the service to year round (it used to stop in February and March due to ice) The ferry operator, CTMA owns the ship in question there, but that company should be looking for newer tonnage fairly soon too.