Out of Drydock Again 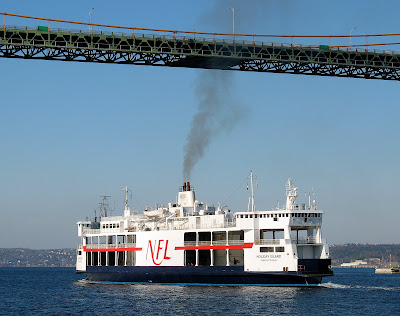 1. Holiday Island steams north under the MacKay bridge this afternoon. After a compass swing in Bedford Basin she will return to pier 9A to tie up. (This a view of the ship's stern) 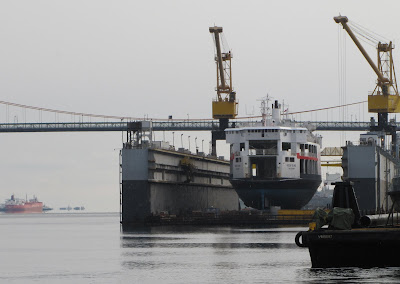 2. Holiday Island in the Novadock yesterday morning. Zoom in and you will see her Voith-Schneider propulsion system. (This is a view of the ship's bow.) What appears to be a rudder is actually a fixed piece forming part of the guard plate under the V-S unit and which can act as an ice knife. 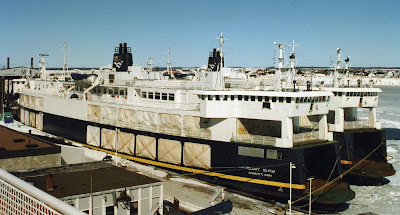 The ferry Holiday Island was refloated in the Novadock this morning. She sailed to Bedford Basin for compass adjustment, then returned to the Narrows and tied up at pier 9A.
The ship was built at Port Weller Dry Dock in 1971 as William Pope, named for a Father of Confederation. Her sister was similarly named Thomas Haviland at launch. These names were thought to be too stuffy for a "fun" vacation destination such as Prince Edward Island, and so were "re-branded" Holiday Island and Vacationland before entering service. Prince Edward Island is neverthelss the Cradle of Confederation, since it hosted the 1864 Charlottetown conference that led to the union of Upper and Lower Canada and the Maritime Provinces to form the Dominion of Canada.
Owned by the Minister of Transport, the ships were initially placed under the management of Canadian National Railroad, later CN Marine, which was eventually spun off as a separate crown corporation, Marine Atlantic.
The pair ran as summer only ferries, between Borden PEI and Cape Tormentine NB. They laid up in winter at Borden, where their open car decks were tarped in to allow for maintenance. Originally painted all white, with an orange CN funnel. they adopted a blue and white paint scheme with Marine Atlantic.
The ships were laid up at the end of the 1996 season, and the Confederation Bridge opened the following year, bringing their ferry route to an end.
Holiday Island was allocated to Northumberland Ferries Ltd to run seasonally from Caribou, NS to Wood Islands, PEI, which it has been doing ever since. At first she operated with the blue and white paint scheme, but by 1999 was back to mostly white, with a large NFL on the side.
In May 2006 she made an unusually long trip to Hamilton, ON for drydocking. Other than that time, she has remained closer to home, usually drydocking in Halifax or Méchins, QC. This year she has had two drydockings in quick succession, a week apart. With bad weather predicted for tomorrow, she will sit tight this time and await for a run back around through the Cabot Strait to Caribou for the winter.
Ostensibly a double ender, the ship can load and unload from either end. However it is generally agreed that the bow end is the one with more superstructure on the top deck. There are wheelhouses at each end, which allows the ship to sail equally well in each direction. The ship is fitted with Voith-Schneider cycloidal propellers (one at each end.) These are vertical blades which rotate on a plate and can change pitch to idle or reverse. In addition, this type of prop permits the ship to slow or speed up simply by changing blade pitch, and without changing engine rpms. Power is provided by two V-16 Ruston engines, geared to drive the Voith-Schneiders, which are individually controllable. This allows for considerable maneuverability, without the expense of duplicate bow and stern thrusters.
As mentioned in an earlier posting, sister Vacationland was renamed Fundy Paradise for service to Grand Manan Island, but she was completely unsuitable for the run and in fact never left her layup berth at Point Edward (Sydney.) She is now lying in Quebec City for possible conversion to a dredge.
Holiday Island will likely go into winter layup on return to Caribou, as that service usually winds down by year end, with Confederation handling all the traffic in the fall and spring.
Posted by Mac at 5:33 PM