Last Grain for the Season 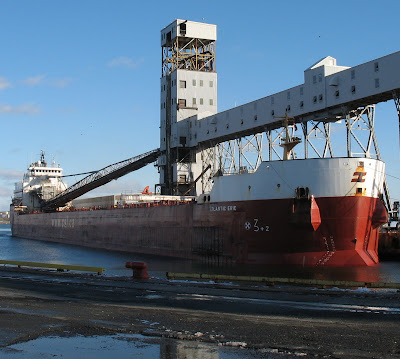 The last load of grain from the Great Lakes arrived on Atlantic Erie on Saturday. The ship completed unloading on Sunday and moved to National Gypsum to take on a return cargo. It is shown here at pier 26 discharging into the grain hopper. The grain is then conveyed to the storage elevator through the structure on the right.
The grain that arrives in Halifax is mostly for local use, and is stored in the grain elevator until needed. It is then trucked out to farms as far away as northern New Brunswick for feed, or milled locally for flour. Grain is a broad term and may include corn, wheat, oats and barley.
The ship was built in 1984 at Collingwood, ON as Hon. Paul Martin. In 1988 it was renamed Atlantic Erie and from 1989 to 1996 it operated under the Bahamas flag in worldwide trade. Since 1996 it has been back under the Canadian flag, and has been less widely travelled. A self-unloading bulk carrier, it can discharge at a rate of up to 5,4000 tons per hour, depending on the cargo. Its carrying capacity is 26,320 tons at Seaway draft and 37,411 at full 34 foot draft.
The St.Lawrence Seaway system will be closing at the end of this week until spring. Grain also arrives in Halifax by train, and some grain is exported, such as a small quantity to Cuba last week on the ship Nirint Canada.

Footnote: Atlantic Erie loaded gypsum for Valleyfield, QC, After unloading there on December 29, the ship left the St.Lawrence Seaway for Montreal and was the last commercial ship of the season.