Only in Canada You Say? RCN or CN? 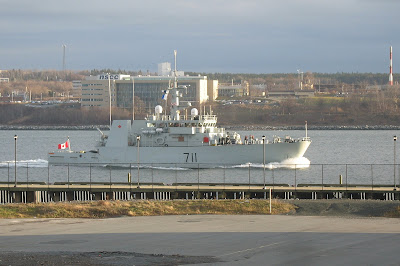 HMCS? Summerside plows its way down Halifax harbour this morning on its way to sea.

Q: What nation on earth could possibly be debating what it calls its navy?
A: Canada, where else!
Yes in those dark days of the 1960s when Canada's military was unified, the once large Royal Canadian Navy became Maritime Command of the Canadian Armed Forces. All military members were issued green uniforms that made then look like Coca Cola delivery men and the Royal Canadian Air Force, Royal Canadian Army and Royal Canadian Navy all disappeared into one amorphous blob - or so we were told!
Ships lost their HMCS designation and became CFVs (Canadian Forces Vessels.)
Shipfax has steadfastly clung to the HMCS (Her Majesty's Canadian Ship) designation in its own form of civil disobedience even going so far as to continue calling Canadian Forces Base Halifax HMCS Stadacona and its adjunct HMC Dockyard.
Gradually the navy has eroded the unification thing by issuing distinctive blue uniforms, and now
our lobbying has finally paid off. No less a body than the Canadian Senate passed a motion on Tuesday to return to the designation Royal Canadian Navy. Not it seems in respect of tradition (the Navy is 100 years old in 2010) but because we still have such institutions as the Royal Canadian Mounted Police. Well Shipfax doesn't care about their reasoning, just about their sentiment. The proper name for the waterborne element of the Canadian military was and should always be the Royal Canadian Navy.

There I have said it in so many words. I have some out from behind my curtain of irony.
Shipfax must now get to work on the Minister of Defence who favours "Canadian Navy" and several namby pambies who continue to resist reality. The reality is that Queen Elizabeth II is the head of state. The navy (whatever it is called) is hers, and we are her subjects. I can't think of too many countries whose head of state is as benevolent, who allows her subjects to play in a large park without supervision, and who asks so little of them. Surely it is only good manners to ungrudgingly admit that she is our Queen? It is also very bad manners to swear a loyalty oath with one's fingers crossed and tongue in cheek.
Some Canadians do not wish to be reminded of this in any official way. If Quebec, Acadians and so many others cannot face reality, that is too bad. My Scots ancestors long ago got over the fact that Scotland did not have its own exclusive king and that it could not speak its own language officially. Talk about historic grievances- there are more people of Scots ancestry in Canada than any other "minority." (Present day Scots have reverted to some prehistoric condition without realizing that they never had it so good!)
But to get back to the Royal Canadian Navy. Calling it the Canadian Navy has no class! It is and always will be the Canadian navy (small "N") Capitalizing the "N" does nothing to make it a distinctive entity. We already sold off the state railroad which has appropriated the CN initials, in an attempt to disavow its Canadian ancestry as it conquers the US. Do we want ships called CN something?
Sure the United States Navy calls itself what it does, but "President of the United States Navy" doesn't work, particularly as its ships would have to be prefixed POTUSN.
As a mature and diverse nation, with a 100 year old navy (which is very young by world standards) it is only proper to recognize reality and tradition. It is the Royal Canadian Navy and it operates Her Majesty's Canadian Ships.
Do you want a second opinion? Read this excellent Wikipedia entry:
http://en.wikipedia.org/wiki/The_Canadian_Crown_and_the_Canadian_Forces
.
Posted by Mac at 8:52 AM