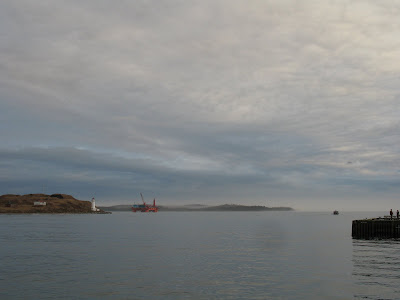 1. Peaceful conditions inside the harbour are deceptive. Big seas are still running outside. The accommodation rig Chemul rides at anchor, and the Port Authority work boat Maintainer I returns to berth at 4 pm.


All did not get back to normal in fact as swells and high seas off Halifax did not calm down as expected. The pilot boat attempted to board a pilot on the container ship Paris Express about 2030 hrs, but could not do so due to the sea state. The ship was turned back, and the pilot boat will now be off station until 0800 hrs in the morning.
Ships are stacking up outside, some at anchor. These include Aegean Pride, Summit Europe, Butterfly, Nirint Canada and Maersk Patras.
All that is not so say there is no activity in the port. The CCGS Earl Grey sailed this evening (but it does not require a pilot.) The supplier Trinity Sea fueled at Imperial Oil. It will not require a pilot when it sails, but both it and McDermott fleet mate Panuke Sea are in port for the time being since it is too rough to work off Sable.
The container ship Pearl River moved to anchorage inside the harbour after completing cargo work. The ship cleared the berth for incoming ships, whenever they may be able to get in.
.
Posted by Mac at 8:59 PM