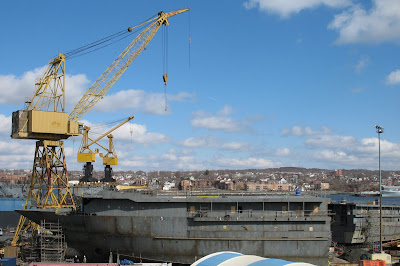 2. The ship was built in two sections that were joined on the launchway.

Pearl Seas Cruises has removed the 2011 schedule from their website. Until recently it had shown a July 2011 start up of the ship Pearl Mist, sailing from Halifax. That schedule has now been taken down, and in its place is a note that says "Under Revision."
Recent press reports detail some of the issues regarding the dispute between Pearl Seas and Halifax Shipyard, so I won't deal with them here.
However, the bottom line is that Pearl Seas is not accepting delivery of the ship, and it remains laid up in Shelburne, NS. Pearl Seas is apparently suing the yard, so the matter is far from resolution.
.