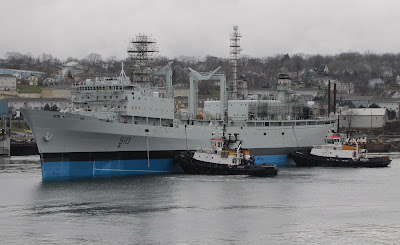 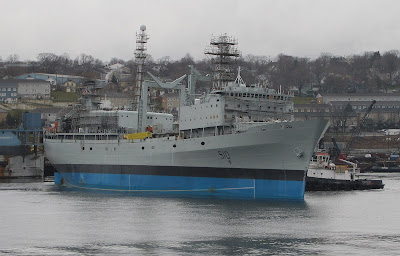 On Saturday morning HMCS Preserver was moved as a dead ship from behind the Novadock at Halifax Shipyard, to the Machine Shop Wharf. The Navy's sole east coast supply vessel is undergoing a massive refit - the third in ten years - to allow her to remain in service until a replacement is built.
There is still no definite word on that - it will be next year at the earliest -when the shipyard is selected to build such a vessel and its west coast twin. No third ship will be built, even though one is needed. There are now rumblings that a used UK ship might be available - HORRORS!
If the RCN believes it was only used by a little old lady to drive to church on Sundays they will believe anything.
Yesterday's move went well, with the tugs Atlantic Oak and Atlantic Willow moving the big ship on a flat calm day. She is pretty tender however, with no ballast and extremely high out of the water. She took a pretty good lean when turning, even at a very slow speed.
She still looks quite capable despite her age. She was laid down October 17, 1967, launched by Saint John DD May 29, 1969 and commissioned July 30, 1970. Her west coast counterpart, Protecteur was laid down in Saint John on the same day, launched July 18, 1968, and commissioned August 30, 1969.
.
Posted by Mac at 7:45 PM