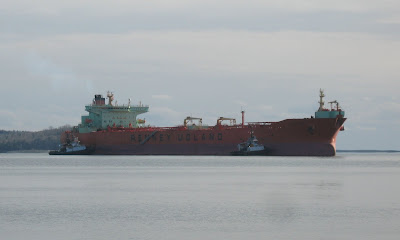 1. Atlantic Larch and Atlantic Fir turn Mattea to line up for pier 25-26.

The big Canadian tanker Mattea arrived this afternoon for maintenance at pier 25-26. Halifax is a convenient place for inwater maintenance and repair work, since the ship can tie up at a pier where cranes and other equipment can be brought to the ship.
Mattea is one of the Newfoundland shuttle tankers, serving offshore oil facilities. These ships seldom enter a port other than an oil terminal, and are too big for ports such as St.John's.
Mattea was built by Samsung Heavy Industries in 1997 and measures 72,126 gross tons, 126,360 deadweight. She is owned and managed by Penney Ugland, a joint Canadian-Norwegian company.
.
Posted by Mac at 2:38 PM