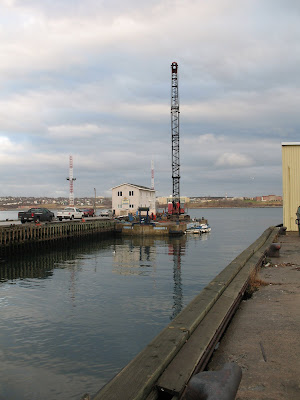 1. Commdive II and Waterworks 1 on scene. 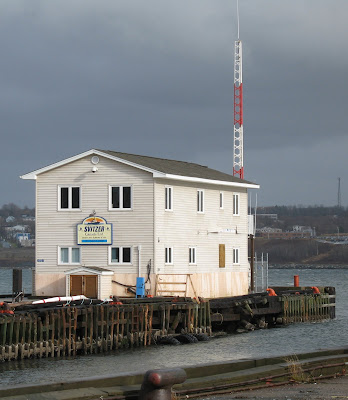 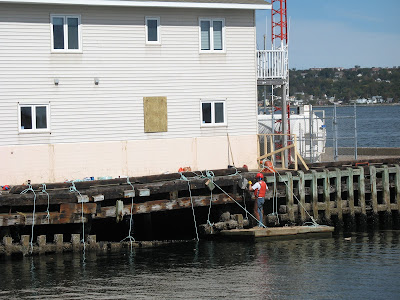 3. Tending to damage from the September storm.

Monday's storm did some more damage to the Svitzer Canada wharf. The pier extends well out into the harbour and has suffered damage of various sorts over the years. It has been hit by ships (more than once) and was severely damaged in Hurricane Juan.
Following that strike it was completely rebuilt to the present configuration. It accommodates Svitzer Canada's office on the top floor and the pilot's office on the ground floor.
Originally it was the called the 'cook house' in the Foundation Maritime days. Its ground floor contained a full galley and mess room for tug crews. A cook and helper prepared three meals a day for up to four tug crews. This included bread, rolls, pies and cakes. The mess room itself had separate seating for officers and crews.
Upstairs was the dispatch office for the tugs. It was manned 24 hours a day, and had radios for communicating with tugs at sea.
An earlier storm in early September damaged some of the piles under the 'cook house' and these were further damaged Monday.
Waterworks construction arrived on scene yesterday to start repairs. Their miniature tug Waterworks 1 (a converted seine skiff) and the barge Commdive II will be used for the work. Commdive II is the only concrete barge in Halifax. Built in 1942 by T.C Gorman for Commercial Divers Ltd, it was built of concrete because steel was needed for the war effort. The barge has survived remarkably well, and has served a variety of purposes, including use as a dwelling.
Posted by Mac at 9:06 AM