Echo does a donut 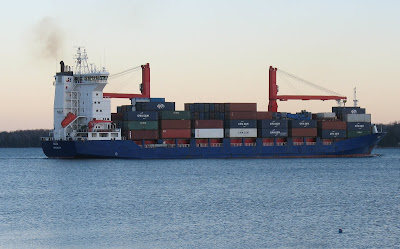 Harbour watchers might well have been puzzled late this afternoon when the container ship Echo made a 360 degree turn in the Lighthouse Bank area of the harbour.
Echo had just left pier 42 for sea when the pilot discovered that the pilot boat was hors de combat. Faced with an all expense paid trip to the next port of call, he apparently opted to come back into port. (He could also have gone to an anchorage outside.) However just as he started into the turn, the pilot boat got under way, and so the ship completed the donut and headed outbound. So at least the pilot did not have to go to Kingston, Jamaica.
Echo was built in 1999 in Turkey as Selma Kalkavan, and acquired its present name in 2007. It is now Dutch owned and flagged. A vessel of 10384 gross tons, it has a container capacity of 1145 and sails for CMA/CGM. The "JR" on her funnel stands for JR Shipping of Harlingen, The Netherlands, which is also her port of registry.
Posted by Mac at 9:02 PM