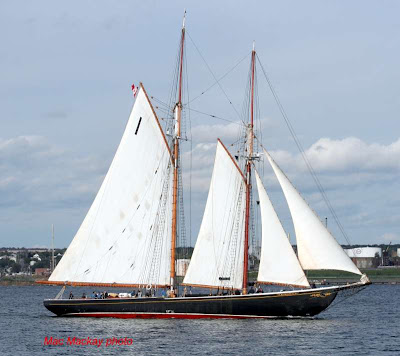 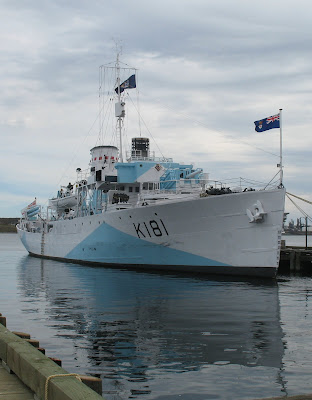 All ships suffer wear and tear and deteriorate over time - even such icons as Bluenose II and HMCS Sackville.
Today's Chronicle Herald newspaper has a front page report on the schooner Bluenose II. That Nova Scotia ambassador and Canadian icon (a similar vessel appears on the back of the Canadian 10 cent coin) is in Lunenburg for a major rebuilding, which according to the paper, has resulted in scrapping the boat's entire hull-keel, frames and planking. The deck has somehow survived, but may also be scrapped. Mast and rigging have been set aside to be re-used. Much wringing of hands has ensued since all the wood was sent to a chipper to prevent it falling into the wrong hands.
Instead of building a new Bluenose III - as had been planned, this rebuilding was organized. It turns out however to in fact be a new Bluenose II, since little if anything of the original will survive. She will get an entire new hull, engines, mostly new deck and will be re-rigged to sail again. Of course Bluenose II was a replica to begin with, and was not strictly true to the original Bluenose, built as a fishing schooner.
As a wooden vessel, nearing forty years of age, it would certainly not be expected to survive in any event, so the hand wringing seems to be a little odd, particularly for replica.

Of more concern is the deplorable condition of Sackville, Canada's (and the world's) last surviving World War II corvette. Not a replica, she is the real thing. Built under wartime emergency conditions, and not intended to survive World War II, Sackville has hung on, thanks largely to voluntary contributions and the navy's own limited resources.
Her condition is perilous - her frames are so wasted that she could not survive drydocking - they are too weak to support the hull except in water. She is leaking badly, and there is no hope in sight for a swift rescue. Plans for a permanent home on the waterfront have been put on hold, and there is no real plan in place to do more than apply bandaids.
Sackville will almost certainly be lost if action is not taken soon. She is more than worthy of a complete rebuilding, but of course with that most of her heritage value would be lost. She was built from 'barn steel' - not high grade warship steel, and she was riveted- an almost lost art. Although she has been much patched and repaired over time, she is still, at least for a short time, intact. Nevertheless as Canada's Naval War Memorial Sackville deserves at least as ambitious a plan as Bluenose II and certainly better - including a permanent indoor home where at least the last vestiges of the ship can be preserved for posterity. Restoration still seems to be a possibility, but much replication is inevitable if she is to survive.
.
Posted by Mac at 8:07 AM