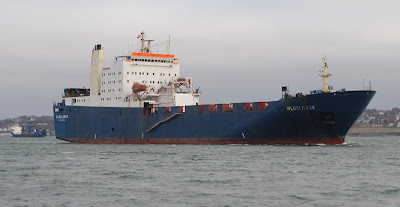 There wasn't much activity in Halifax Harbour on Christmas Day. Longshoremen knocked off on Christmas Eve at 1100 hrs and returned to work on Boxing Day, so there was no work at the container terminals or the commercial piers. The last ship to get away was the St-Pierre RoRo carrier Fusion, which went to anchor in the lower harbour at 1100 on Christmas Eve.
But Christmas morning the RoRo carrier Wloclawek left her anchorage in Bedford Basin and went to sea, destined for Houston, TX. The ship has been on long term charter to the Canadian military - see previous posts. Her departure meant that the pilot boat crew and a pilot had to work on the Holiday.
The only other ship in port was Georgia S anchored in Bedford Basin. The offshore rig Chemul remained at anchor.
Posted by Mac at 10:07 PM