June 14 marks the first anniversary of the arrival of AFL New England in Halifax for the start of a new feeder line to the US east coast. Unfortunately no one is celebrating. The saga of American Feeder Lines and the ship AFL New England reached a turning point while I was away. According to newspaper reports the likelihood that the ship's crew would run out of food hastened the Halifax Port Authority's decision to order the ship alongside pier 33. It had been anchored in Bedford Basin since AFL terminated its service, and I understand that numerous maritime liens were placed on the ship by various unpaid creditors. 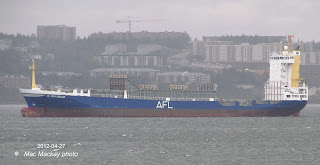 1. AFL New England anchored in Bedford Basin in April - stormy times were ahead.

Since tying up the crew has been repatriated, although I do not think they have received all their back wages. The Halifax Port Authority has taken possession and is providing security/watchman services.
The owner of the ship is a single ship company and its only asset is the ship, so it will end up being sold to satisfy creditors. The company behind the shipowner would like to have the ship back and put it back in service, but is unwilling/unable to satisfy the liens and unable/unwilling to post a bond to cover them, and is therefore presumably willing to forfeit the ship. Whether he is eligible to purchase the ship by marshal's sale is a matter of legal interpretation.
The ship was bareboat chartered to AFL, and the owner probably does not feel responsible for any of the resulting mess. The judicial sale prpocess may take many months, and so for the time being the ship remains tied up at pier 33.
The unfortunate history of feeder lines running from Halifax has had some bright spots over the years, but there has always been the issue of finding enough traffic to make the service pay.  Most operations were discontinued because they could not generate enough business.
Here is a sampling of some of the earlier ships:

2. Bergfalck as it was then called, began a Halifax/ US East Coast feeder service in 1973 for Maritime Coastal Container Line. It ran for a few years, but the ship was renamed Berglind in 1977 and took up a charter with Saguenay Shipping, and the next year worked out of Iceland. It sank off Glace Bay in 1980 after a collision with the Danish cargo ship Charm. 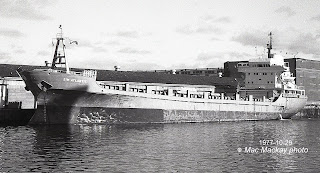 3. Zim Container Lines started its own feeder service in 1977 with Zim Atlantic It ran between Halifax, Boston, Baltimore and Norfolk. 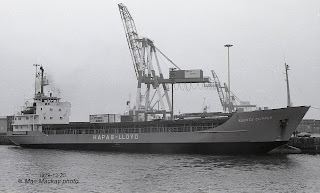 5. The most successful feeder service was operated by Hapag-Lloyd using the Yankee Clipper, Starting in January 1980. It ran between Halifax, Portsmouth and Boston

6. Later repainted blue, the ship made its last trip in October 1993.

A strange theme runs through all these ships - every one of those pictured (except Zim Atlantic) was built by the J.J.Sietas shipyard in Germany.

Another short-lived operation was Searoad, operated by a Gloucester MA company, using the ship Grey Master in 1974. It was to provide a RoRo, truck trailer service between Halifax and Gloucester. The ship could carry 60 semi-trailers or 75 cars, but its initial thrice weekly service was cut back and eventually discontinued. 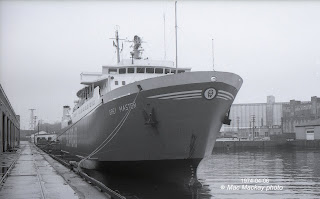 7. Grey Master was a lovely ship, and could even carry 12 passengers. 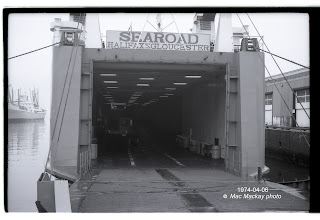 8. Searoad  did not attract enough business and was gone in a matter of months.
Posted by Mac at 10:33 PM