After days of discharging apparently clean water through side scuppers and hawsepipes, the question is, will they be pumping the entire harbour through this ship?
Normally ships do some washdown of the anchor hawsepipe to prevent friction sparks, wash away rust scale and remove muck from the anchor chain and anchor itself. They also wash out the chain lockers to remove accumulated muck too. This is usually done from deck hydrants, which pump water directly from the sea (or harbour).
Ships also exchange ballast water at sea- to remove invasive species (a requirement of many coastal states including Canada and the US). They aslo discharge ballast water as they load. Ships have tanks exclusively for ballast, which is needed to mainain the ship's stability and trim.
Some modern tankers can also use seawater displacement ballasting to maintain ship stability as oil cargo is pumped out (oil floats on water-well most of it).That water is then purified or pumped ashore for cleaning and is not discharged directly back into the sea. 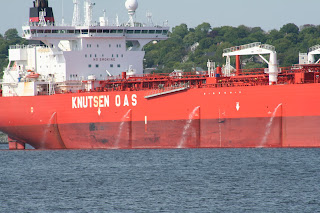 Also as Heather Knutsen is doing, they flush their ballast tanks with (relatively) clean harbour water to ensure that whatever residues may be left in them are removed. Since this can take a long time so as to insure large dilution ratios, it is done only during times of maintenance or when the ship is idle. Also because the ship's stability is maintained by ballast tanks, it can usually only be done while the ship is in harbour.

Sea water is used as a coolant for ships engines. Massive amounts of water may be needed in warm climates to keep the engines within safe operating temperatures. Very cold water may have the opposite effect, and some engine heat is diverted to prevent freezing of intake water in arctic regions.
And finally water is used as a coolant in warm weather to keep the hull from distorting. Distortion or hogging can occur with loaded ships or light ships, and is usually not a structural issue. It is of particular concern in draft restricted areas such as the St.Lawrence Seaway where even a few inches of overdraft can prevent a ship from transiting the locks. This not an issue with Heather Knusten, which is far too big for the Seaway. Lakers are fitted with special deck hydrants that look for all the world like lawn sprinklers, which cool the ships deck and hatches, keeping the ends of the ship from sagging.
Tankers could equally well be called "pipers" because they are full of piping systems to heat, cool, load, unload, wash and stabilize. Liquid is continually moving around the ship in miles of pipe.
Posted by Mac at 9:17 PM