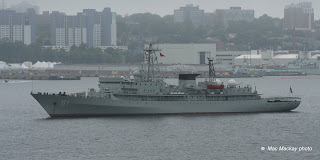 Ships from many navies have visited Halifax over the years, but some have been notably absent. The Peoples Republic of China has certainly been one of those -until today that is.
Cool relations with China over the past few years have perhaps been a factor in that situation, but recently our government has made overtures to China in an effort to find customers for its resources, particularly oil. China is already a major customer for coal, iron ore and timber.
Naval ship visits have always been symbolic, and so the government must be welcoming the arrival of the PRC naval training vessel Zhenghe, even if it is three days ahead of schedule.
Put the the early arrival down to a passing tropical storm, but the Canadian navy is not prepared to roll out the welcome mat until Monday, and so the ship will remain at anchor for the weekend.
Commissioned in 1987 Zhenghe (pennant number AXH 81) is especially desinged for officer training and in addition to the usual operating crew, it can accommodate 30 instructors and 200 midshipmen.
Although it is fitted with some weapons and defence systems and a helicopter platform, it is not very warlike in appearance, and that is perhaps why it is such a suitable vessel for such a visit.
The ship is on a round the world, 11 country tour.