As mentioned in the last posting the Turkish-owned Mustafa Kan arrived over night for bunkers. The operation was completed late this morning, allowing some photo ops.
The ship is unusual as stated, because she has crane pedestals fitted, but no cranes. She is thus a gearless  cargo ship.The ship also has a breakwater forward to deflect seas from deck cargoes such as containers.  While this is not an unusual feature, I was fortunate to get a shot from aft showing the structure below it. 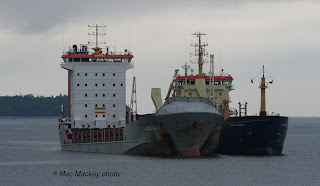 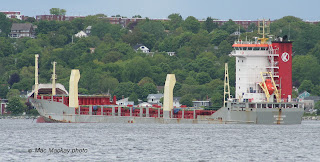 An interesting ship.
Posted by Mac at 4:03 PM