Alsterstern - another first for Coastal and Woodward

Another first time arrival today for a tanker from Coastal Shipping. [see Nanny last week]
This time it is Alsterstern one of a pair of tankers acquired last year from the German Rigel Shipping Co. Neither ship (the sister is Havelstern) has been renamed.

Built in 1994 by MTW Schiffswerft in Wismar, Germany these chemical/product carriers measure 11,426 gros and 17,080 deadweight, and are considerable larger than the similar Desgagnés trio, which were built by the same yard for the same orginal German owners. One of those, Dara Desgagnés was in this week too, and loaded at Esso. 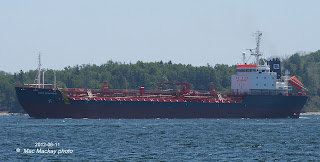 Dara Desgagnés was built in 1992 as Elbestern, and came to Canada as Diamond Star in 1993 for Rigel's Canadian operation. After charter to Desgagnés it was sold to them in 2010. It measures 6,262 gross tons and 10,511 deadweight. The ship usually carries product from the Ultramar refinery in St-Romauld, QC.

Alsterstern tied up at Ultramar in Eastern Passage to load for Newfoundland and Labrador.
Coastal Shipping is part of the Woodward Group a multi-armed industrial/commercial operation, based in Happy-Valley-Goose Bay.
Posted by Mac at 11:11 AM