1. Princess of Acadia arrives in Halifax this afternoon.

The Digby-Saint John ferry Princess of Acadia is back in drydock in Halifax, less than a month after its last visit. According to sources, the ship is having a problem with tail shafts, which wasn't completely rectified during its last drydocking. June 25 Update: The Digby Courier newspaper reports that the ship's props became fouled by lobster potlines for the second time. Apparently there is some dispute over the ship's proper course and the location of lobster fishing areas, resulting in the ship tangling with the lines.
The 10,051 gross ton ship was built in 1971 in Saint John, NB for CP Ships to replace a smaller ferry of the same name. The previous Princess of Acadia was built in 1951 in Govan Scotland as Princess of Nanaimo and served in British Columbia waters until 1963 when it came to the Bay of Fundy. When it retired in 1971 it reverted to its original name for a time and became Henry Osborne in 1972 to run between Saint John, NB and St.John's NF to carry vehicles only. The operation was not a success and the ship was sold for scrap in 1974. The German tug Hansa towed the ship to Bilbao, Spain to be broken up in January 1974. 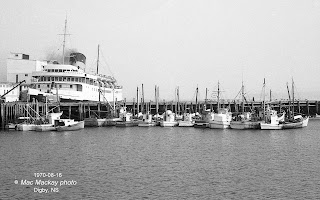 2. The previous Princess of Acadia at the old ferry terminal in Digby in her last year of operation, 1970.

CP  operated the new Princess of Acadia,  linking its rail terminus in Saint John, with the Dominion and Atlantic Railway (a subsidiary), until 1976, although the Canadian government, through the Minister of Transport took over ownership in 1974. CN Marine and successor Marine Atlantic then operated the ship until 1997 when current operators Bay Ferries took over.
In the past few years there have been repeated concerns about the ship's age and the need for a replacement. Various reprieves have been granted with subsidies extended, but there seems to be little action at present to build a replacement.
As the only remaining ferry service across the Bay of Fundy, the route is an essential one, and the inconvenience of having the ship out of service in holiday season cannot be overestimated.
Government action is needed to organize a replacement, and in view of today's shipbuilding and economic climate, it is becoming urgent. Any serious downtime for the ship will have a major impact on the economy out western Nova Scotia in particular.
For more on this ship and its service, see the Bayferryman blog link.
Also added June 25: 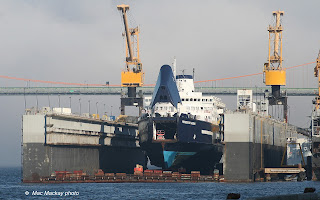 Photo added June 25 While in drydock the owners are taking advantage of the opportunity to carry out some other work. If the shaft bearings or gear boxes were damaged when the lines became tangled around the props, it may be some time before that work is completed. Today the ship's bow visor was open, but I could not see if there was hull work going on. The Bay Ferries web site indicates a tentative resumption of service on Wednesday June 28, but will give 24 hours notice.
Posted by Mac at 6:03 PM