The handsome tanker Heather Knutsen has been occupying a prominent spot in Halifax harbour since Friday. One of Canada’s largest tankers (80,918 gross tons, 148,644 deadweight tonnes) it was built in 2005 by Samsung Heavy Industries in Koje as a shuttle tanker for the White Rose project off Newfoundland. It is on a ten year charter to Husky Oil Operations by owners Knutsen Boyelaster VI KS of Haugesund, Norway and operated by Canship Ugland of St.John’s.

With the White Rose floating production and storage ship off station, the ship has been tramping oil from other from other sources. After unloading at Imperial Oil last Monday to Wednesday (June 11-13 ) it proceeded to the outer anchorages where there is lots of room for a ship of its size.

On Friday June 15 however it returned to port. Some minor maintenance work is apparently going on, since I have seen the tug/workboat Halmar shuttling back and forth with technicians or spare parts.

When a ship of this size comes into Halifax to anchor for a few hours to take bunkers, it is usually assigned to anchorage number one south of George’s Island. This is a short term deepwater anchorage but cannot be used for long periods because it impedes traffic going into Imperial Oil and Autoport and the upper harbour.

For longer term periods, the anchorages north of George’s Island are suitable for most ships, but a ship this size would also impede traffic if anchored too far north. The only spot for it therefore is just north of George’s, square on the ferry track between Woodside and Halifax. When the ship swings at anchor, with a north/south heading, all is well, but if the wind shifts, and the ship moves to an east/west position. There is just enough room for traffic to pass ahead and astern of the ship. 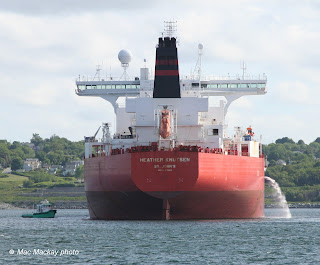 3. With bows east, and the tug/workboat Halmar alongside.
Anchoring in Bedford Basin is another possibility, but only if the ship can get under the bridges. I don’t know the air draft of this ship, but it may be an issue

Pier space is also at a premium, but would also be an option if there was no commercial traffic at those piers. This was certainly the case last week, when all the piers that were long enough for the ship were already occupied. Also the cost of using a pier, and the cost of tugs to get the ship alongside would be dollars the operators would rather not spend.

4. bows heading south of east, the ship allows for easy passage of traffic.

So is the ship too big for Halifax harbour? I would say no, but only because it is the only ship of its size currently in the port. There is no room for another of its size unless it was able to go to Bedford Basin. 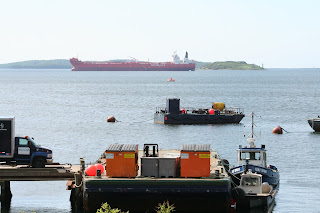 5. Seen from under the Macdonald bridge, the ship dwarfs George's Island, the only other obstruction in the lower harbour.
Posted by Mac at 11:19 AM