The recent rash of Rigel tankers (past) now includes a present member of the fleet. Colorado Star arrived last evening and tied up at Imperial Oil. Built in 2010 at 21st Century Shipbuilding Co in Tongyeong, South Korea, it is a ship of 8,851 gross tons and 13,091 deadweight. Although orginally flying the German flag, it is now registered in Malta.
Conditions were not particularly favourable for photography, but to complete the series here it is: 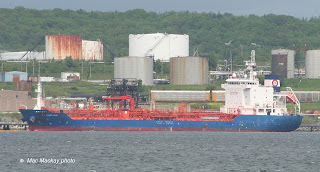 The ship bears little resemblance to Alsterstern and Dara Desgagnés, the past members of the fleet that called recently. Colorado Star also does not appear to be an ice class vessel.
Posted by Mac at 5:22 PM