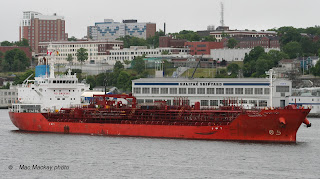 1. Davino D arriving.
The chemical/product carrier Davino D is unloading heating oil at pier 9. A pipeline from the pier runs to the storage tanks on Barrington Street now operated by Wilson's Fuels. Wilson is an independent fuel dealer and operates its own gasoline stations and distributes and sells home heating oil. As an independent they are free to buy product from a variety of sources, including the local refineries or from abroad.
The Barrington Street tanks were once operated by Fina.
Davino D was built in 2005 and operated as Panam Caribe until 2007 then as Clipper Caribe until 2011. It is now owned in the Netherlands by DePoli Tankers, but is registered in the Bahamas. The ship measures 8,254 gross tons, 14, 246 deadweight tonnes.
After tying up alongside pier 9, Dominion Diving's Roseway rigged an oil containment boom around the ship in case of  a spill.