The Royal Navy's "new" survey and ice patrol vessel HMS Protector arrived this morning for a two day visit to HMC Dockyard. It is due to sail on June 15.
The ship was built in 2001 for the Norwegian G.C.Rieber Shipping Co. Long associated with work in northern waters, Rieber once had operations in Canada, with research vessels that also worked as sealers and suppliers.
This ship was built in 2001 as Polarbjorn, and used to support oil exploration and research.
In December 2008 the Royal Navy's antarctic patrol ship HMS Endurance suffered engine room flooding off Chile and was nearly lost. It eventually returned to Portsmouth on the deck of the semi-submersible heavy lift ship Target and has been laid up ever since. With current austerity programs in the UK it is unlikely that the ship will ever be repaired. Endurance was the former Rieber ship Polar Queen, chartered in 1991 and purchased in 1992 by the RN. It had been plagued with technical issues for several years. 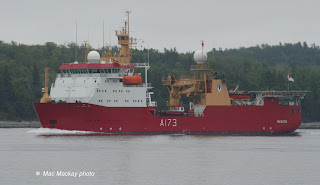 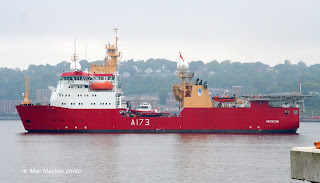 In 2011, the RN chartered Polarbjorn for three years until the future of Endurance is known. Renamed HMS Protector it is returning from its first antarctic trip. It carries a helicopter landing platform aft (relocated from the bow by the RN)  and a pair of small craft, that appear to be a landing craft and a survey launch. The ship is well fitted with thrusters, but only carries about half the power of its 8,000 hp predecessor, which was rated an icebreaker.
Posted by Mac at 10:43 AM