The small supplier Thor Omega anchored in #2 anchorage this morning to take bunkers. Operated by Thor P/F of Hosvik, Faeroe Islands, the boat is operating under a Canadian coastal license. That is, it is permitted to operate in Canadian waters, because no Canadian ship was available to do the work. 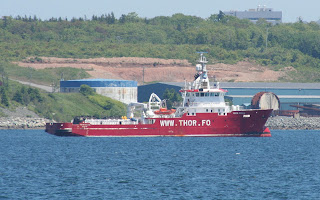 Its work is to supply fuel and stores to the seismic research vessel Geco Caribbean conducting  a survey in the Flemish Pass area off the Grand Banks. The license is good for the period of May 15 to October 15.
It could be that the heavy fuel oil or marine gas oil is not immediately available in St.John's and therefore the vessel came to Halifax. Built in 2008 it has special tanks for carrying fuel, and is in fact a small tanker. In addition it can carry deck cargo. It measures 1061 gross tons and 1575 deadweight.
A former fleet mate from Thor P/F is doing similar work for new owners Atlantic Towing Ltd. Now called Atlantic Birch II it is supplying another seismic boat in waters between Canada and Greenland. (Since it is now a Canadian flagged vessel it does not need a coasting license).[SEE ADDENDUM]
Seismic vessels are expensive to operate and send most of their data out by satellite for analysis elsewhere, so it is cheaper to keep them on station and supply fuel and stores to them.
Thor Omega's owners advertise their web site on the ship's side: http://www.thor.fo/.
ADDENDUM:-see comment following- Atlantic Birch II was removed from the Canadian Register on June 6 and is presently in Saint John, NB.
Posted by Mac at 4:55 PM