Zim has good news for Halifax

Zim Container Line brought some good news to the Port of Halifax today, along with a new service and a new (to Halifax) ship.
Zim Constanza is the first ship to arrive since Halifax was added to a weekly transatlantic service from Israel to the US. The ship starts in Haifa, then calls in Piraeus, Genoa, Tarragona, Halifax, New York, Savannah, Kingston (Jamaica) and back to Tarragona and Haifa.
Kingston is a major traffic hub for Zim and other lines, and an interchange port for other Zim services. The added tonnage will also be good news for Halterm which lost the eastbound leg of Zim's Asia service last year, leaving one weekly call on Wednesdays westbound for the far east. 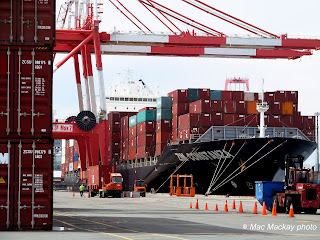 Zim Constanza was built in 2010 by Jiangsu Yangzijiang Shipyard in Jiangyin, China, and is a ship of 40,542 gross tons, 50,107 deadweight, with a capacity for 4,256 containers, including 698 reefers. It is owned by Rickmers Shipmanagement (Singapore) Pte Ltd (a major German shipowner), registered in Liberia, and on long term charter to Zim.
Through the fewnce photos of sahips at Halterm are not my favourite form of photo, but they do form useful comparisons. On April 28, 1975 Dart Europe was tied up in about the same place. Although it was a large ship of 30,491 gross tons, it could carry only 1556 TEU. First generation cranes were able to reach all the  way across the ship. 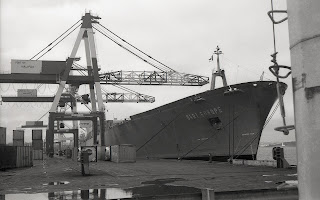 Built in 1970 Dart Europe was broken up in 1999, and Halterm has been extended to the south twice.