Late news from the Dredging Scene

Late News from the Dredging Scene


As Bay Ferry Man has reported the last two Verreault hopper boats, I.V. No.9 and I.V.No.10 departed Meteghan for Quebec.
I.V. No. 11 and I.V. No.14 were sitting forlornly in Quebec City over the May long weekend, along with the two former DPW dredges, D-7 and D-8. 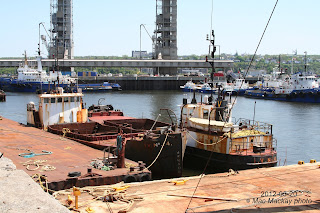 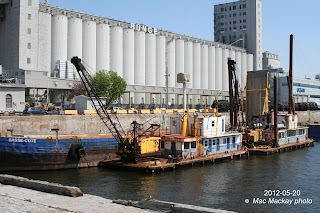 What plans Océan may have for the fleet remains in question. They have certainly been able to corner most of the market with their existing fleet, so it is likely at least some of the former Verreault plant will go to scrap. 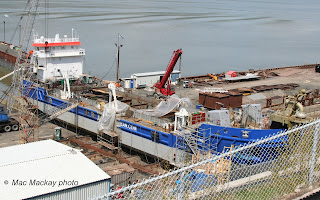 3. Océan Traverse Nord on the launchway at Ile-aux-Coudres May 19. The bow mounted ejector nozzle is prominent. It can be connected to a pipeline or used to "rainbow" the dredge spoil. 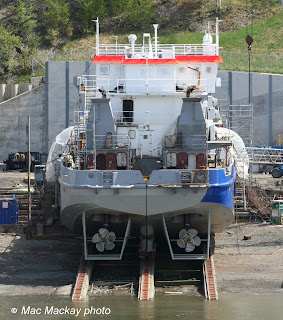 4. The split hull construction is visible in this stern shot. The house is offset and fitted on rollers to remain level even as the hulls open. They are hinged at deck level. The funnels casings are canted outboard so they do not touch when the hull opens. The ship is propelled by azimuthing thrusters, similar to a tug.

To be named Océan Traverse Nord, it is a trailing suction hopper dredge, self -propelled and of the split hull type. In other words, its hull is divided lengthwise and is hinged so that the two halves will open to dump its cargo. If conditions dictate however, it can pump out over the bow, either through a pipeline or by “rainbowing” - that is discharging in a giant stream. The new ship is to be in service in August, and will take up a multi-year contract to dredge the St.Lawrence River channel at the eastern end of Ile d’Orléans, in an area called the North Traverse. It is the main shipping channel and is subject to annual silting due to spring run off.

The one remaining member of the former Verreault fleet not to be included in the auction sale to Océan was the trailing suction hopper dredge (TSHD) Port Méchins. According to reports it was denied renewal of its inspection certificate several years ago and could no longer operate in Canadian waters. However in 2009 it was sent to Mexico to work on dredging the Rio Coatzacoalcos at Minatitlan for Erosion Control SA CV. Following that work it was laid up and was reported to be in Veracuruz at the time of Verreault’s bankruptcy.

5. Port Méchins in Quebec in 2001. The port trailing suction pipe is stowed alongside. The ship has bottom doors to discharge dredge spoil.

It was built by Lobnitz in Renfrew Scotland in 1949 for The British Tanker Co Ltd (later BP Tanker Co Ltd.) as Haffar. The name is associated with Iran, but means “excavated” or “dug out” in Arabic. I believe the dredge was used or was to be used in Iran by the parent Anglo-Persian Oil Co. However Iran nationalised the oil industry in 1951 and British Petroleum was formed in 1954 and BP Tanker Co in 1955.Where the dredge was used from this point I am not sure. When the Suez Canal was re-opened following the closure of 1956 I understand the dredge may ha e worked on the canal before it was returned to the UK, and eventually sold.
The J.P.Porter Co brought it to Canada as Lockeport in 1961. In worked in many areas of eastern Canada and the Great Lakes, including the North Traverse. 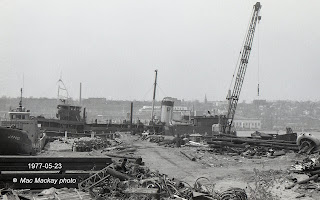 6. Still in steam, Lockeport rests at The J.P.Porter Co yard in Dartmouth, amid the junk and wreckage left when the company failed.Porter's dock was almost under the Macdonald bridge, and has since been (mostly) cleaned up. 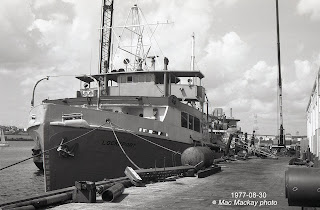 7. Following a drydocking at Dartmouth Marire Slips, Lockeport was rebuilt and re-engined at the French Cable Wharf by Sceptre Dredging. 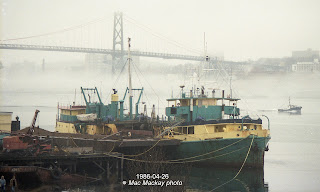 8. In Sceptre colours, Lockeport in winter layup at the French Cable Wharf. It continued dredging the North Traverse despite changes in ownership.

When Porter’s was wound up following the dredging scandal, Sceptre Dredging acquired it in 1977 and it was extensively rebuilt, and converted from steam to diesel. Sceptre ran into trouble finding other work and Fraser River Pile and Dredge bought the ship intending to expand their interests to the east. They also did not succeed and the ship was sold to Verreault in 1992 and renamed Port Méchins. Despite a lot of money spent in upgrades, the ship did not meet Canadian standards and the long term contract for the Traverse was lost.
The receivers took possession of the ship in December 2011 and has also now been sold . Its Canadian register was closed May 23.

In recent years TSHDs have been chartered in from overseas to dredge the Traverse and the ports of the Magdalen Islands due to an absence of any Canadian TSHD dredges on the east coast. Recently a Dutch dredge was used to dredge the Sydney, NS harbour for new port development.
Two interesting developments on this front are worthy of note:


An application has been made to grant a coasting license to the dredge Manzanillo II owned by the Belgian dredging giant Jan de Nul. The application is to use the ship to dredge Saint John harbour in New Brunswick. For mam years Verreault did this work and used conventional clam bucket dredges. In recent years Harbour Development has had the contract for this work (and may still have) and have also used clam shell dredges for the work. This has proven to be highly laborious, time consuming and expensive. Now the work will be done -presumably at a lower cost by using a TSHD. Work is to start July 1 and to be completed November 12.

Weeks Construction of the US (and parent company of McNally Construction) has contracted for a new TSHD in the US. It would be safe to assume that this vessel might be available to work in Canada should conditions warrant. BAE Systems of Mobile, AB will build the 8,500 cy capacity vessel to a design by IHC Merwede, a leading Dutch dredge builder.