Pilot boat service in Halifax was delayed today when A.P.A. No.18 broke down and had to be towed back to base by the tug Atlantic Oak. The 1974-built boat is back up to A.P.A.No.1 (built in 1976) which was out of service for maintenance.

1. Atlantic Oak, towing over the bow, brings A.P.A.No.18 back into port after a breakdown this afternoon.
Departure of the visiting Norwegian warship Thor Heyerdahl was delayed for several hours until A.P.ANo.1 could be returned to operation. 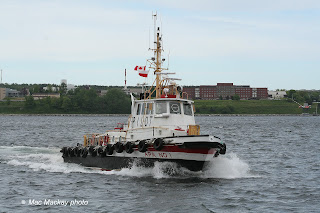 The new pilot boat Chebucto Pilot has been delivered to Halifax (it arrived about Sunday June 3) but it has not been commissioned yet (nor is it officially registered.) The new 18 knot boat is the first of two boats built by Abco of Lunenburg for the Atlantic Pilotage Authority. (The second will be delivered in the fall for service in Saint John.) 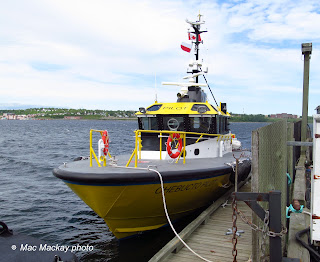 3. The handsome new Chebucto Pilot has been delivered to Halifax, but is not yet in service. 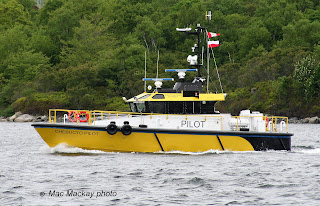