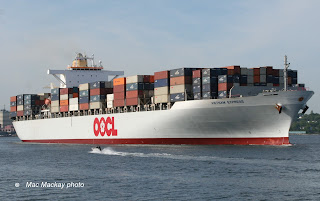 Vietnam Express sailed this afternoon with a surprisingly clean hull. The ship must have just come out of the shipyard, because there was scarcely a mark on it. A few tug scuffs on the stern and a bit of wave action forward was it. A beautiful sight.
Despite its Hapag-Lloyd sounding name, the ship still displays its OOCL colours and banner. It is actually owned by Nissen Kaiun of Imabari, Japan. It is a post-Panamax ship of 66,462 gross tons, 5888 TEU (including 586 reefers) built in 2007 as OOCL Italy and renamed in 2010.
The re-naming to H-L pattern was apparently to give H-L some of its own presence in the joint service with OOCL,  since H-L is not contributing any post-Panamax ships to the rotation.
Posted by Mac at 8:29 PM