There was naval activity in Halifax Harbour today - but not from our navy. 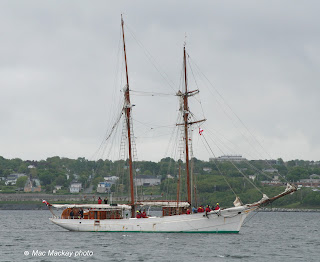 1. Etoile returns to her berth after refueling at HMC Dockyard. 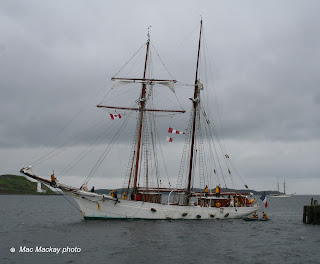 2. Belle Poule gets underway using an inflatable boat as a tug.

The lovely French naval training schooners Belle Poule and Etoile left their berth at the Tall Ships Quay to venture over to HMC Dockyard for fuel- Etoile in the morning and Belle Poule in the afternoon. They used their inflatable boats as tugs to dock and undock. Built in 1932 the vessels are veterans of the Free French navy of World War II.

Meanwhile the Royal Norwegian Navy Ship Thor Hyerdahl made a quick visit to Halifax today. It is presumably on its way to Quebec City for this weekend's naval review. The helicopter frigate is one of a class of five ships assembled in Spain using some hull components built in Norway.The ships are diesel and gas turbine propelled and have a published speed of 26 knots.
The ships' visits conincided with a naval conference in Halifax.
Posted by Mac at 9:54 PM