Work on the extension to peir 9B is carrying on apace.
Following completion of dredging by Harbour Development, McNally Construction has placed a crushed stone mat base and is busy levelling it using Derrick No.3. The process involves dragging a heavy beam back and forth the across the bottom. The crane suspends the beam at the correct depth and the barge  moves using its own winches and anchors established on shore and on the harbour bottom.  The tug Whitby sets and resets the anchors  as needed to reposition the barge. 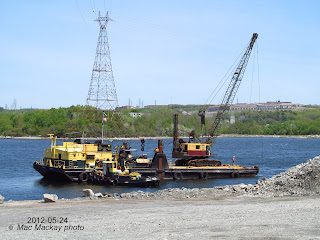 1. Derrick No.3 suspends a heavy drag beam to level the new gravel mat 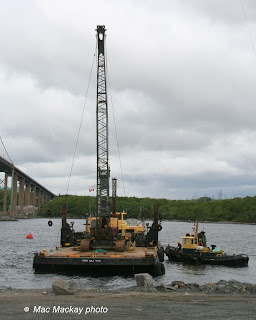 2. Whitby repositions Derrick No.3. One of the orange anchor buoys can be seen in the background.

Meanwhile in a round-the-clock operation, dozens of workers are placing concrete for the first crib, using the slip-forming process, where the concrete form is raised continuously as the concrete is poured (the CN Tower was built this way too). The crib is being built on the deck of the semi-submersible barge Beaver Neptune. When the pouring is completed and the concrete sufficiently cured, the barge will be partially sunk and the crib will be floated off. 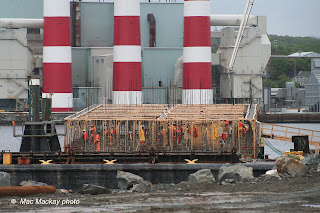 3. Orange suited workers place concrete in the slip-form on Beaver Neptune. The continuous pour goes on twenty-four hours a day. The concrete pumper truck's delivery pipe is seen at the top left of the photo.
Posted by Mac at 9:35 AM