Port St.Jean, Porte St.Louis, where are they now

The Where Are They Now Department of Shipax can point to a sterling record of tracking down ships after they have vanished from the Halifax scene. However the staff have thrown up their collective hands in frustration after failing to find the whereabouts of two vessels that were once fixtures in Halifax harbour.

Porte St.Jean and Porte St.Louis were members of a five ship class of gate vessels, built in the 1950-1952 era. As gate vessels, their duties would be to tend the submarine nets at the entrances to major harbours. They were built with trawler-like hulls, and a small working deck for maintenance and other duties related to the floating gates. Originally they were also fitted with a single 40mm gun, mounted on the forecastle head.

However during their tenure with the RCN there were no active gates, so they were turned over mostly to reserve training, and as such wandered the coasts, with their weapons removed. Although the accommodations were cramped and uncomfortable, the boats were responsive in handling and good seakeepers. In later years the deck house was extended forward to increase accommodation and add bridge space for navigators. 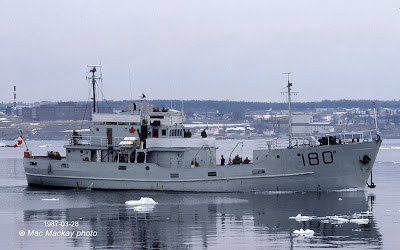 Named for the gates in the fortifications at Quebec and Louisbourg, Porte de la Reine and Porte Québec were built on the west coast and stationed there. Porte Dauphine, the only one of the quintet to be built at Pictou NS was the odd man out, and from 1958-1974 was painted red and loaned to the Department of Transport for Great Lakes Research.
Porte St.Jean and Porte St.Louis were built by George T. Davie + Sons Ltd in Lauzon, QC in 1951 and 1952 respectively, and assigned pennant number 180 and 183. They were based in Halifax for their entire careers* and were common sites in the harbour and in many coastal ports while conducting reserve training for navigators, cooks, engineers and radio operators. (In typically perverse naval fashion "Jean" was always pronounced "Gene".) 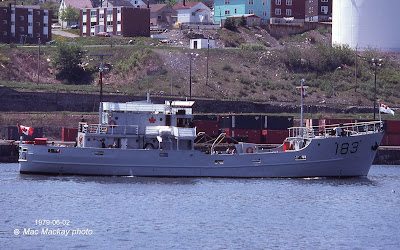 On May 8, 1997 the pair were sold and moved to layup in Bedford Basin., They languished there until 2000 when they were resold to US owners and moved on August 31 to the IEL pier in Dartmouth to be fitted out for sea. On September 4 Porte St.Louis did a trials trip in the harbour and on September 7 it sailed towing Porte St.Jean. They were fitted with liferafts, and their names painted on the bows, but otherwise they seemed to be pretty much as they were when the navy sold them.

The destination was stated to be New Jersey, where they were to be converted to yachts. This would seem to have required more than a little imagination, but since I have heard nothing of them, anything is possible. 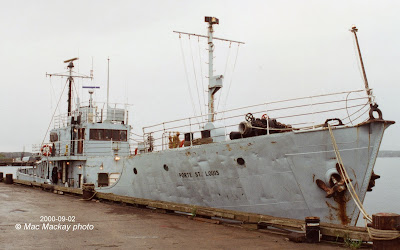 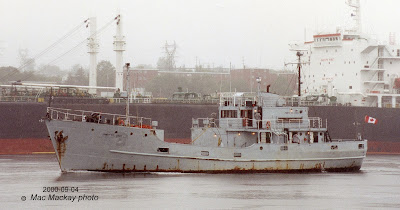 On sailing, the boats were flying the Canadian flag and registered as yachts to avoid the regulations imposed on commercial vessels. This has added to the difficulty in tracing their movements since yachts generally "fly under the radar" when it comes to tracking.

Any news on their activities since sailing from Halifax would be welcome.

Update:
I hear from one person that at during 1965/6 these vessels were based at HMCS Star, in Hamilton, ON, for use by Naval Reserve Divisions on Lake Ontario.