A high level view of proceedings

There was concentrated activity in the harbour for a short period late this afternoon, and I took a high level view.

Outbound at the time was HMCS Windsor: 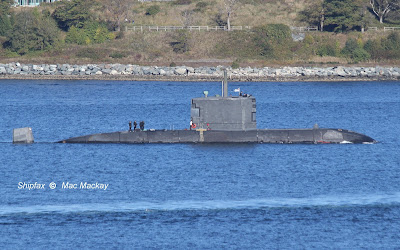 The cruise ship AIDAdiva cleared her berth at pier 20 and moved out into number one anchorage for a compass swing. 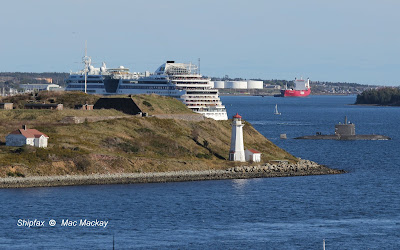 Windsor was able to squeak in between the ship and George's Island. (That is Oceanex Sanderling in the background at Autoport, loading for a mid-week trip to St.John's.)

All this activity caused NYK Deneb (Panama flag) to proceed inbound west of George's Island. Although not a large ship by current standards, it did make an impressive sight.

I have not been paying enough attention to the NYK ships of this class. No less than a dozen, all named for heavenly bodies, are NYK's contribution to the G6 Alliance.
NYK Deneb was built by Hyundai Heavy Industries, Ulsan in 2007. The 4922 TEU ship measures 55,487 grt, 65,600 dwt. It is owned by Sumitomo Finance SMFL and operated by NYK Line.

Once AIDAdiva had completed its compass swing, it remained in the anchorage, but backed north, until the inbound Agios Minas (Liberian flag) had passed en route to Fairview Cove. It was able to take the usual path east of George's.

Built in 2001 as CMA CGM Ravel by Daewoo Shipbuilding and Marine Engineering Ltd in Okpo. It is a 73,059 grt, 79,465 dwt ship with a 6627 TEU (including 500 reefers) capacity. It took its present name in 2014 when it returned to International Maritime Enterprise of Athens, after the CMA CGM charter.

Back at ground level again, the Norwegian Dawn was tied up at pier 22 (not pictured) and Celebrity SUMMIT stern in at pier 31. 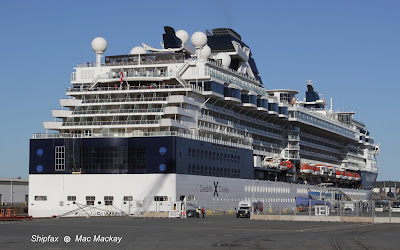