Until recently diesel locomotives were built in Canada. GM's Electro-Motive Division in London, ON built the units for domestic users and for export. Most of the latter came through Halifax and were loaded aboard ships at pier 24 or pier 9.

An order of 15 locomotives for Indonesia went out in March 1986 aboard the Dutch Mirabella. In those days some of the engines were lashed down on deck, protected only by factory installed tarps. 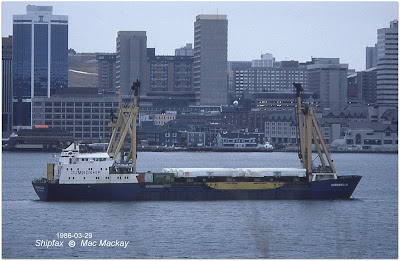 As seen from Dartmouth, Mirabella carries a large yellow spreader lashed to the starboard hatch coaming. 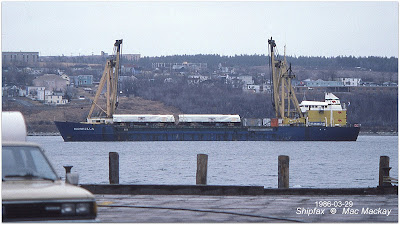 Viewed from the Halifax side,  the 60 tonne boom is visible on the after derrick, positioned to handle the yellow ballast boxes used as counterweights for heavy cargoes. The accommodation superstructure is offset to the starboard side of the ship to provide room for them or other long loads.
Owned by Jumbo Ships, and flagged in the Netherlands Antilles, the relatively modest sized ship of 3482 grt, 4420 dwt nevertheless carried a pair of 300 tonne derricks and a 60 tonne derrick. The De Groot + Van Vliet shipyard in Slikkerveer built the ship in 1977.  It was sold in 1996 and renamed Raben and again in the same year Solomon No.1 and Solomon. It was deleted from Lloyd's Register in 2011 with the notation "existence in doubt."

Among the many vanished container lines that once served Halifax, the Shipping Corporation of Trinidad and Tobago (SCOTT Line) is only one of many. It carried out a weekly service for a few years, using a variety of short term charters. One of these was the German owned Lisa Heeren which made its first trip in March 1986 and completed its charter in January 1987. 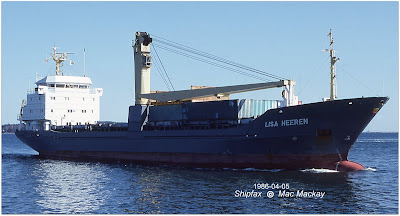 Built in 1985 by Heinrich Brand shipyard in Oldenberg, the 2732 grt, 320 dwt ship had a container capacity of 177 TEU and carried a single 35 tonne crane.
Shortly after the ship was built it was chartered out and briefly renamed Band Aid II to carry aid to Ethiopia. The Band Aid musical group, founded by Bob Geldof raised money for anti-famine relief and chartered at least nine ships for Band Aid cargo and had "Band Aid" as part of their names.
Lisa Heeren remained under Johann Heeren ownership as 89: Santa Paula, 90: Lisa Heeren, 92: Rangatikei, until it was sold becoming 96: Tucana, 05: Heimglimt, 07: Dyna Bulk. It is still in service under that name for Bulk Shipping Ltd of Bergen, Norway, flying the St.Vincent and Grenadines flag.

Also sailing for SCOTT was the Stenholm. Built by the same shipyard, but in 1982, the 999 grt, 2703 dwt ship had a 277 TEU capacity and the same single 35 tonne crane and hull form, but a quite different superstructure. 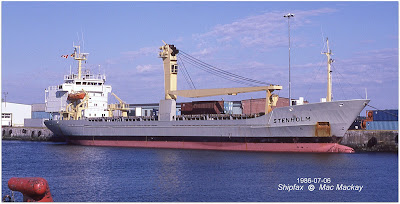 Some ships still carried conventional masts and cargo derricks. One of these was the Greek flagged Kraton that arrived with a cargo of steel. Built along very conventional lines by Mie shipyard in Yokkaichi, Japan in 1975, the 7426 grt, 11,999 dwt ship had four 20 tonne capacity booms mounted on single pole masts. It was also fitted for carrying deck loads such as timber, and thus the derricks were mounted well above deck level and it had retaining stanchions to secure the deck cargo. 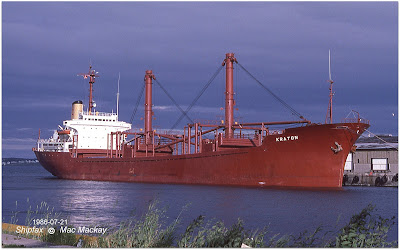 Kraton at pier 31 with its uniform paint scheme.

Another general cargo ship with a variety of derricks was the classic profile River Maje, operating for the Nigerian National Shipping Line Ltd. It was built in 1980 by Brodogradiliste i Tvornica Dizel Motora "Split" in Yugoslavia (now Croatia), but along lines that hearkened back to the 1960s and before.

A launch from Partridge Motor Boat Services gets away from the ship while it is at anchor.

With one 80 tonne "jumbo" and seven 22 tonne derricks, the ship was intended to serve ports with minimal infrastructure. It was able to carry 428 TEUs but none were in evidence on this call in Halifax. It did tie up at Fairview Cove, but unloaded steel wire coils, a process that took nearly a week.
The ship served its original owners until sold for breaking up, arriving in Alang May 24, 2001.

Electric cranes became the preferred method of unloading bulk carriers, but they often carried a few derricks too. Golden Prince was fitted out that way with five 25 tonne cranes and two derricks forward to serve number one hatch . Nippon Kokan KK of Shimizu, Japan built the 21,193 grt, 35,174 dwt ship in 1984 and it was strengthened for heavy cargoes. It could also carry 728 TEU of containers. 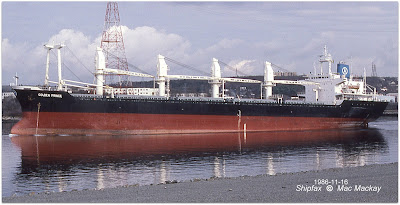 Golden Prince transits the Narrows en route to National Gypsum. One of the occasional "one off" ships to load there.

Another bulk carrier that was listed as a container ship was Elisa Dyo. Dating from 1976 when it emerged from the AG Weser Seebockwerft in Bremerhaven it was measured at 15,356 grt, 33,650 dwt and was fitted with portable guides to carry 680 TEU of containers.  It also had four 25 tonne cranes and was obviously intended to pick up any type of cargo it could find. Built as Ramu it became Raimol in 1981 and Elisa Dyo for Cyprus flag owners in 1984. 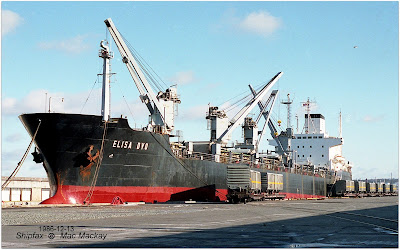 The ship arrived December 10, used its own cranes to load the rail cars and sailed December 18. It did not get far as the cargo shifted and it returned to anchor off Chebucto Head December 21. It was not until December 29 that the ship returned to port where it unloaded and re-stowed eight cars, and carried out additional stowage work within the holds. It finally sailed January 4, 1987.

In 1989 the ship was sold and renamed Kotah Inda  and arrived at Chittagong September 12, 2008 to be broken up.