Thorco Liva - was looking for work

The multi-purpose general cargo ship Thorco Liva was anchored off port this morning and arrived at pier 9C later in the morning. It arrived from Belfast Lough anchorage, Northern Ireland where it had been anchored since late September, looking for cargo to take it to the US or Canadian East Coast. 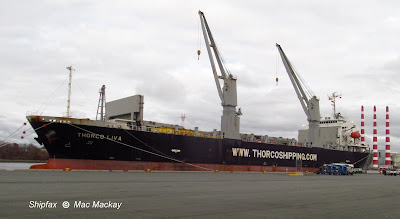 Thorco Liva at pier 9c taking fuel from a tank truck, which is hidden from view behind a pair of  platform lifts and welding equipment that may be loaded aboard the ship for some work.

Later in the day trailers of steel fabrications arrived on the pier in preparation to load the frames for cable racks (known as tanks, due to their cylindrical form.) We have had several ships fitted out with cable tanks here, then proceed to Newington, NH, where the cable is manufactured, to load the material.

Built in 2012 by the little known Honda* Heavy Industries of Saiki, Japan, the 13,110 grt, 16,901 dwt ship originally flew the Panama flag, but now uses Hong Kong. Thorco of Hellerup, Denmark has seven "L" class ships, all from the same yard, and all with typically Japanese fine-lined hulls and austere superstructures. The two-hold ships have movable tween decks and a pair of 50 tonne cranes.
[* Honda is a family name and the shipyard has no connection to the automobile manufacturer]