Today was the official inauguration of the new $80 million dollar Irving Oil facility in Woodside. Consisting a of a rebuilt pier, distribution centre and tank storage, the installation is now totally separate from neighbour Imperial Oil. They had shared facilities for about 10 years. 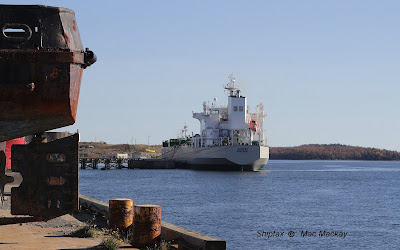 The tanker Acadian was alongside unloading directly to Irving's own tanks.

It was just a month ago that Acadian delivered the first cargo the new Woodisde dock (and you read about it here: http://shipfax.blogspot.ca/2016/09/weeks-roundup.html .

In a strange twist however, Acadian will be moving to Imperial Oil dock #4 Friday morning. She could be delivering furnace oil to Imperial.