Time and tide may wait for no man, but man certainly has to wait for suitable weather, and such was the case with the the port today.
High winds (accompanied by heavy rain) for the third weekend in a row, meant numerous delays in shipping.

Yesterday was to be the finale for the Halifax cruise season, with the arrival of the Serenade of the Seas and AIDAmar. However AIDAmar arrived a day early to avoid weather and remained in port overnight October 27-28. Serenade of the Seas did arrive on the 28th but also remained in port over night and only sailed this morning. Heavy swells at the pilot station presented some challenges for the disembarking pilot, when the pilot door was awash for some of the time.

The container ship Maersk Pembroke made it into port on schedule, but OOCL Antwerp was held off an hour or more, since the pilot boat had to return to town. It would normally have picked up a pilot at Herrring Cove, but the dock there was unsafe, due to breaking waves. UASC Zamzam put off its 1600 arrival until 1930. 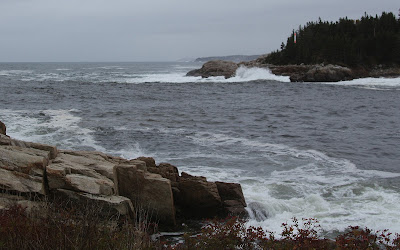 Looking out from Herring Cove, the distant Chebucto Head is wreathed in spray and surf crashes onshore. 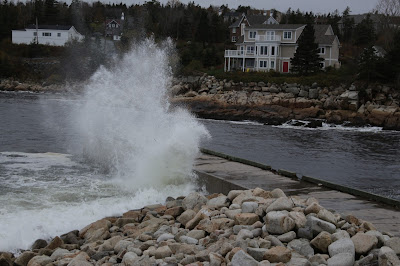 The pilot boat often uses this wharf in Herring Cove to pick up pilots - but not today.

Several other ships were sent back to sea including the cargo ship Atlantic Pioneer, tanker Acadian and bulker Sea Marathon. The latter was to come in for bunkers at 0830, but is now scheduled for a 2130 pilot boarding time. The auto carrier Oregon Highway has decided to wait until tomorrow.

Departures were similarly effected. Nolhanava was to sail for St-Pierre at 0830, but finally sailed at 1630 and Maersk Pembroke, scheduled for 1230 waited until 1800. 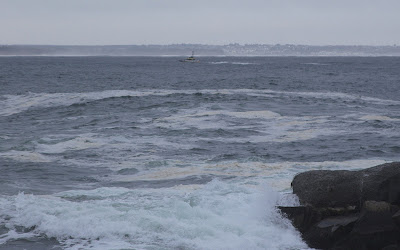 Chebucto Pilot is far enough out from Portuguese Cove to avoid backwash. 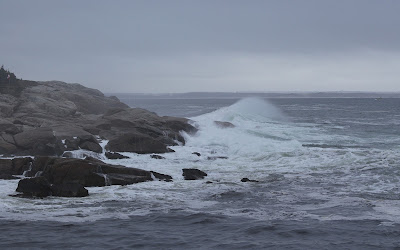 Barely visible through the salt spray, Chebucto Pilot makes its way back into port after disembarking the pilot from Nolhanava as heavy swells smash along the shore at Portuguese Cove.

Things looked quite calm in the harbour, but there was a large swell running offshore, creating some spectacular surf in the outer reaches of the harbour.