Hapag-Lloyd continues to bring in odd ships that they have inherited from the CSAV merger. Today's arrival is Maule a 6589 TEU (1162 reefer) ship dating from 2010. It was built for Box Ships Inc of Athens and chartered to CSAV. 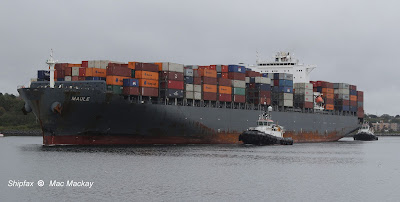 The tugs Atlantic Larch (bow) and Atlantic Oak (stern) escort the Maule through the Narrows this afternoon.

CSAV (Cia Sudamericana de Vapores) established in 1872 and South America's oldest and largest shippping line, merged with Hapag-Lloyd during 2014. Controlled by the Luksic family of Chile, along with a banks and copper mining interests, CSAV had a near collapse in the 2008 recession. The company wad the world's seventh largest world container line, but it shed many charters, and increased direct ownership of its fleet, falling to twentieth place before regaining profitablity and into sixteenth place when the merger took place. Its forty ships (about half owned directly) had a 281,796 TEU capacity. 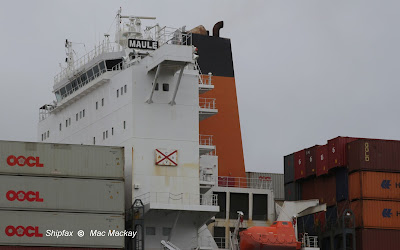 With the merger Hapag-Lloyd is able to deploy more than 200 ships with more than a million TEU capacity, and suit the ships more closely to the routes. The merger also helped Hapag-Lloyd to return to profitability in 2015 despite plummeting rates. 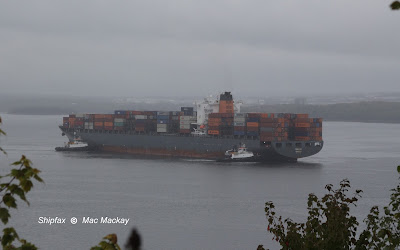 Maule turns with tug assistance to back in at Fairview Cove.

Maule was built by China Shipbuilding Corp of Kaohsiung, Taiwan and measures 75,752 grt, 80,200 dwt.and is managed by Allseas Marine Inc of Athens under the Liberian flag.

Maule is a river and district in Chile that takes is name from the Mapudungun words for "valley" (mau) and "rainy" (len). It would feel right at home in a gloomy Halifax today.