Thanks to some well timed breaks in the fog and driving rain, there were a few photo ops of harbour activity today.

The cruise ship Sirena arrived and tied up at pier 22. Although there was not a great deal of wind at the time of arrival, the ship took two tugs to berth. It is very unusual for cruise ships to take tugs - they have lots of thrusters and usually make out fine by themselves. Since most cruise ships are painted white they also hate to get fender scuffs by using tugs.

Sirena loiters in mist in the anchorages awaiting tugs.
Whatever the reason, the ship had to wait until tugs became available. Atlantic Oak had just sailed the tanker Acadian from Irving Woodside, and it became available first. However the other tugs were moving Energy Panther from anchorage to Irving Woodside, and it was some time before Atlantic Willow was freed up to assist. 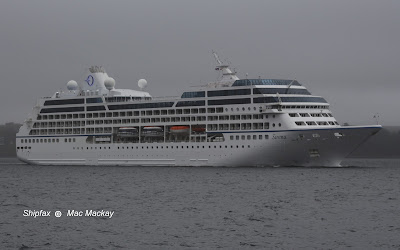 Underway again towards pier 22, with one tug on the port bow, it will take its second tug just off the pier.

Sirena is a new name for Halifax. The ship was built in 1999 by Chantier Atlantique, St-Nazaire as R Four for the ill-fated Renaissance Cruise Line. It became Tahitian Princess in 2002 and Ocean Princess in 2009. Now owned by NCL Bahamas of Miami, it received its current name earlier this year when it received a major refit. It has a stated capacity of 850 passengers.

The Energy Panther - see yesterday- is the first non-Irving tanker to tie up at Irving Woodside. Its last port was given as Ijmuiden, Holland, so even Irving Oil with its massive refining capacity in Saint John, is now importing refined products. The company recently purchased a refinery in Ireland, so it seems likely that they will be moving product around the oceans.

Another tanker arrived last night and anchored in Bedford Basin. CPO France is smaller than the usual handy-size, medium range tanker we are accustomed to seeing. Built in 2008 by Hyundai Mipo, it comes in at 23,353 grt, 37,304 dwt. 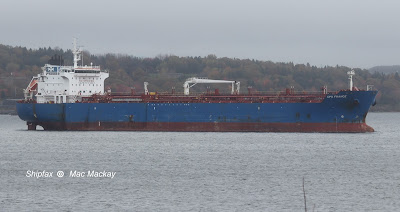 Operated by Offen Tankers of Hamburg, it was due to move to Imperial Oil this afternoon during a period of heavy rain. However for a brief shining moment late this morning it was in a spot of sun in the Bedford Basin. However I was not quick enough to get there to capture the event.

So how foggy was it?
CMA CGM Tancredit was sounding its fog horn, and was almost invisible until it got right up to Halterm.

It was even foggier later in the afternoon when OOCL Kaohsiung arrived. It was sounding its fog horn all the way through the harbour and up into the Narrows. 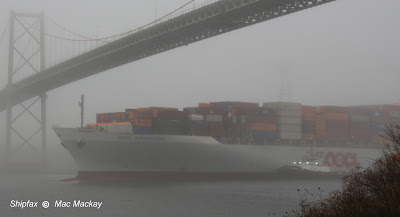 The ship became visible as it neared the MacKay bridge 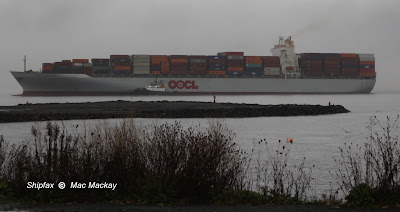 It finally emerged into a clear patch in  Bedford Basin.