It has been some time since a ship loaded at National Gypsum. Despite an improving US economy, demand for gypsum is still low and ships have been few and far between.

Today's arrival is perhaps encouraging. CSL Tarantau arrived in ballast from Baltimore, indicating a demand, rather than just a backhaul cargo. 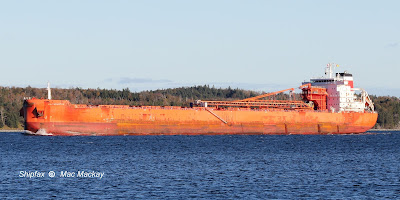 This is the first time I have seen the ship since it was renamed in January 2016. It had sailed as Balto for  Klaveness Self-unloaders, a partner in the CSL self-unloader pool with CSL, Algoma and Oldendorff. Late in 2015 Klaveness divested its five ships to pool partners CSL and Algoma, and all have since been renamed.

The ship first called in Halifax as Balto.

Balto was built by Chengxi Shipyard in Jiangyin, China in 2013 to the ocean version of CSL's Trillium class design, so it was a natural fit in the CSL Americas roster.  At 43,691 grt, 71,405 dwt it is too large to take a complete load at National Gypsum due to draft restrictions at the Bedford Basin pier. However ships of this class take full loads of stone at Auld's Cove and bring in full cargoes of coal also. 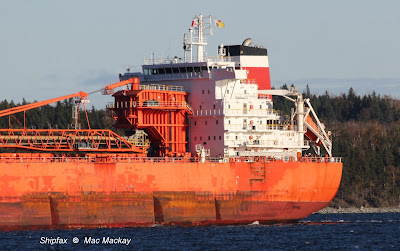 The ship's upper works look fine, but the hull paint is decidedly inferior.

CSL's takeover involved repainting the funnel to CSL colours, and a hasty repainting of the name and clumsy paint over of the Klaveness bow banner. Nothing has yet been done to correct the terrible paint job the ship received at the shipyard. (Its starboard side is much worse). I guess that will have to wait until a scheduled drydocking a few years off into the future. At that time of course it will adopt the CSL black hull to match the rest of the fleet.

The ship's name recalls a Great Lakes self-unloader, built in 1964 and sold for scrap in 1999. That Tarantau also used the unusual spelling and pronunciation TARE'-AN-TOE.