More of the same, a newby and some old stuff

More of the same

It was five cruise ships today, but much fewer passengers, and two of them were small and one was a hold over.
Disney Magic (2400 passengers) remained in port all night and only sailed this afternoon, giving its passengers a second look around Halifax or shore excursions farther afield.
The extra day gave the ship time to take on fuel and perform some other chores. 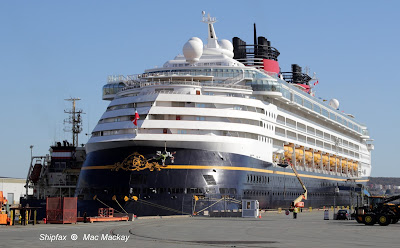 Algoma Dartmouth delivers fuel on the port side and platform lift works from the dock side, and as always the painter attends to the ship's name.

Disney Magic is certainly one of the most striking looking cruise ships.

Zuiderdam is free of the decorative excesses of some other lines and has a remarkably clear upper deck.

Pearl Mist arrived at pier 23 on her final visit of the season. The Halifax-built ship sailed mid-afternoon. With a capacity for 210 passengers, it has a gross tonnage of 5109 grt. 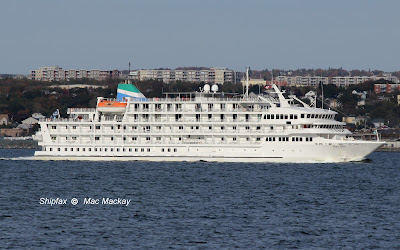 Pearl Mist sailed for Lunenburg, where it will spend the night.


Victory I arrived at pier 24 and sailed mid-afternoon for Yarmouth. It has a capacity of 210 to 215 passengers. 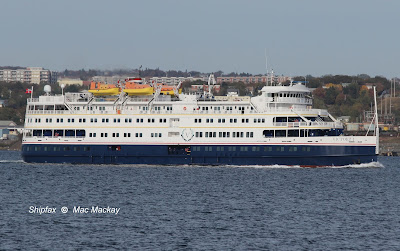 The ship was a late addition to the cruise schedule after its previous operators went bankrupt after a collision with the end wall of a Seaway lock last year. The former Saint Laurent was hastily re-branded and went back into service. It spent the summer on the Great Lakes from July, with cruises from Chicago, Toronto and Montreal.
Built as the Cape May Light in 2001 it also carried the name Sea Voyager from 2009 to 2015. Last year's planned cruises from Florida to Cuba were cancelled but are scheduled for this winter.

Atlantic Sea is the third of ACL's new G4 ConRos. It tied up at Fairview Cove early this morning and sailed late this evening. 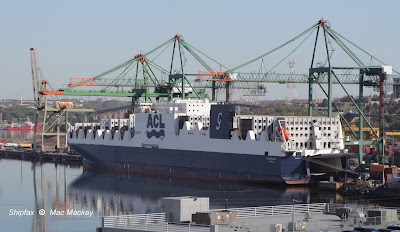 The 100,430 grt ship is registered in Liverpool. UK, where it will be welcomed October 10 for a christening ceremony. The sponsor will be Princess Anne.

I have been mentioning that Shipfax was started in 1986, and that is the same year that two active Canadian Coast Guard ships were built. In the background of the Atlantic Sea photo above is CCGS Earl Grey, built by Pictou Industries in Pictou, NS. It entered service in June 1986. The ship received a nine month $11mn+ Vessel Life Extension refit at Davie Quebec and returned to Halifax in January of this year.

Also recently refitted is CCGS Edward Cornwallis. It had a $2.6mn re-do at Newdock, St.John's a year ago. It arrived this afternoon. 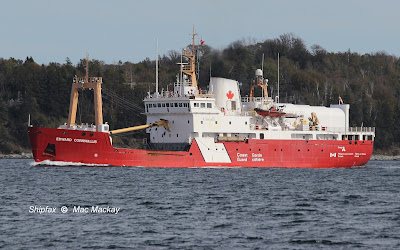 Built by Marine Industries Ltd in Sorel, QC, it arrived in Halifax for the first time August 21, 1986, with a firetug greeting. It did not enter service immediately due to engine and derrick problems and first set sail in December, but returned to port with electrical problems. It still had issues in January and February of 1987 but those were apparently worked out by March when it was at work icebreaking in the Gulf of St.Lawrence as far north as Blanc Sablon.