NYK Line - collect the whole set, and a classic arrival

As mentioned previously, the NYK Line is member of the G6 Alliance and has contributed a whole class of twelve 4922 TEU / 65,000 -66,000 dwt ships to the Pacific Atlantic 1 service, calling in Halifax regularly. Today's arrival was NYK Remus - the last one that I hadn't seen before. Dating from 2009 it was one of the four built by Hyundai, Samho. The others date from 2007 and 2008, and came from Hyundai's Ulsan yard. 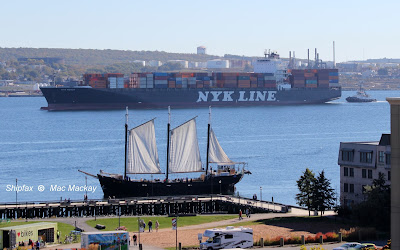 All the ships carry celestial names, with Remus and sister NYK Romulus named for the two moons of the asteroid 87 Silvia, that themselves are named for the mythical twin founders of Rome, children of Rhea Silvia. These moons were only discovered in 2004.

The other ships in the class are named Constellation, Daedalus, Delphinus, Demeter, Deneb, Diana, Meteor, Nebula, Rigel, and Rumina. One might think that these names relate to celestial navigation, the fall back for modern sailors when electronic systems fail. But some in fact they figure more in astrology, which some sailors may have to rely on if their navigation skills are rusty.

The classic arrival today is the cable ship IT Intrepid, built as the Sir Eric Sharp in 1989 by Swan Hunter, Wallsend. It has the traditional look of a cable sip, with bow and stern sheaves, but has one concession to modernity- twin funnels. 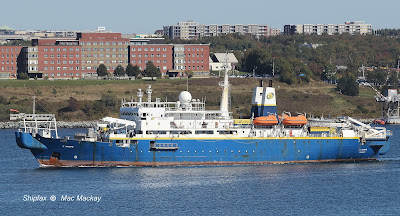 IT Intrepid inbound passes the Nova Scotia Hospital.
And no the Sobey's sign appearing above the centre block of the main building does not indicate a change of ownership. The ever increasing Dartmouth skyline extends for many miles back inland behind the provincially owned facility and abounds with new shopping and residential developments, among them a Sobey's grocery store.

The ship passed from original owners Cable + Wireless of the UK, via a series of mergers to IT International Telecom, the Canadian cable company, in 2005 and was renamed IT Intrepid. Sailing under the Barbados flag, it ranges far and wide in its work. IT International Telecom's Pier 9a base will be home to the ship for the next week or so.

This time it is preparing to work under a Canadian coasting license to trench, lay and bury a fibreoptic cable joining the Hibernia and Hebron oil fields to Newfoundland. The nine segments, totalling 727.939 km will land at two locations in Logy Bay, NL. The cable will permit high capacity communication for the oil fields, but will also contain scientific "nodes" that will collect data along the path of the cable for research purposes.
The work is due to start October 16 and last until November 16.