It was a record day for cruise ship passengers in the port of Halifax despite or because of weather. It would have been busy enough with the regularly scheduled Anthem of the Seas (4,905 pax) and Carnival Sunshine (3,006 pax) but there was also the arrival of Disney Magic (2,400 more) to contend with.
The Disney Magic was diverted from its usual route out of New York to avoid Hurricane Matthew, and instead headed for Saint John and Halifax.The passengers probably thought they got the worst of it anyway as a fierce storm passed through the area last night with extreme high winds and torrential rain, and certainly very rough seas.

Carnival Sunshine inbound for pier 20, with Anthem of the Seas already occupying pier 21-22, frame the bow of Disney Magic at pier 30-31.

By the time they put in to Halifax however, it was a bright and shiny fall day. Not so last afternoon and evening (Thanksgiving Day) when the southwest bound Norwegian Gem sailed more or less on time, but the northeast bound Rotterdam opted to stay in port until 0230 hrs this morning. It ended up hove too off the eastern shore of Nova Scotia as the storm rolled on. It was scheduled for Charlottetown, but near hurricane force winds in the Cabot Strait and Gulf may change those plans.
Both Newfoundland and PEI ferry routes were shut down for at least 24 hours, and wide spread flooding and power outrages ravaged the Sydney area, which has been declared a disaster zone.
The Canso Causeway was closed to traffic due to boulders washed up on the road by high seas. Car traffic was permitted later as snow plow escorts cleared the boulders for a path.

My short term memory may be playing tricks on me, but when a ship named Common Venture was scheduled to arrive today for bunkers, a little bell went off in my head. The name sounded familiar.
It was in March - April 1987 when drift ice from the Gulf of St.Lawrence was blown in to Halifax harbour for few days by a strange combination of wind, tide and the Gulf Stream. This rare occurrence was certainly noteworthy and it did play some havoc with shipping, and even brought the icebreaker CCGS Louis S. St-Laurent into the port to escort ships.

One ship that was in port at that time was called the Common Venture. It arrived to load grain, and was in port for the week long duration of that event. 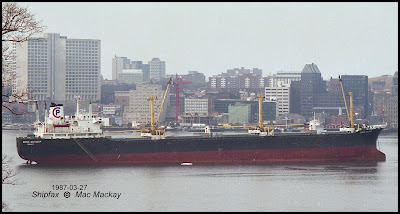 On arrival March 27, 1987 a small chunk of ice alongside the Common Venture (i) was the precursor of more to come. There was a ten mile wide band of ice along the coast outside the port at that time. 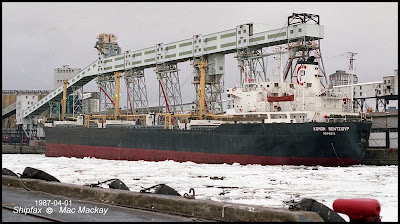 Once the ship moved to pier 28 to load on March  31, the port was choked with ice and closed to traffic. The ice eventually departed on the tide and the harbour was clear again April 5, 1987.

That Common Venture (i) was built in 1971 as the Kurushima Maru by Kurushima Dockyard in Hashihama, Japan. It was sold and renamed Wealth Venture in 1972 and became the Common Venture in 1974. Her Greek owners retained the ship until 1993 when it was sold and renamed Odysseas and again in 1994 became Valeria R. under the Cyprus flag. In 1997 it sold again becoming Pearl of Dammam under St.Vincent flag.
On June 9, 1998 it broke its moorings during a cyclone and grounded in the port of Kandla in western India with a cargo of sulphur. The ship was refloated by Smit Tak on July 24 and towed to Alang where it arrived September 12, 1998.
The ship was a bulk carrier of 15,589 grt, 26,000 dwt and carried five derricks of 10 tonne capacity.

Today's Common Venture is owned by the same Greek company, Common Progress Compania SA of Athens. Also a bulk carrier, it was built in 2011 by COSCO Dalian in China.

This ship carries four 36 tonne cranes (and four bright blue bucket grabs) and measures 32,987 grt, 57,002 dwt. It is one of  six identical sisters in the owner's current fleet.  See: http://www.commonprogress.gr/fleet.htm

The Dartmouth shore is almost unrecognizable after 29 years, and the ships are quite different too. The newer one is 20m longer, 10m wider and 4m deeper, with more than twice the carrying capacity. It would also have a significantly smaller crew and will operate more efficiently as well.

Wallenius-Wilhelmsen is in the midst of a fleet upgrade, bringing in new larger and more efficient ships. Today's arrival Theben is the third of the new ships, with an 8,000 car capacity. Sisters are Thalatta and Thermopylae.
The new HERO (High Efficiency RoRo) ships are built to neo-Panamax dimensions, but so far have been working Asia / Europe via Suez. 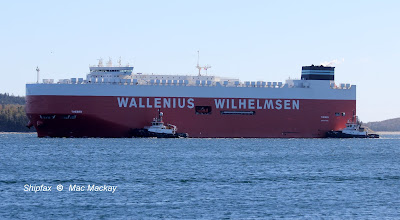 Theben measures 75,283 grt and was built by Hyundai Samho and delivered in April of this year.

The large funnel structure contains an exhaust gas scrubber.
On entering harbour Theben idled in the anchorages until another ship cleared Autoport. That was Triton Leader a 60, 876 grt ship built in 2010 by Imabari Zosen in Japan. It has a 7,500 car capacity, and is one of more than 120 auto carriers in the NYK fleet.

In one of those strange twists of the shipping business, Theben is not actually owned by Wallenius-Wilhelmsen. It is owned Orix Corp of Tokyo and managed by Eukor Car Carriers Inc, a Wilhelmsen partner company that specializes in carrying Korean cars.