It was a slow weekend for all but cruise ships, and even they must have felt a let down due to cloudy weather Sunday and torrential rain and high wind on Monday.

The tanker Seameridian sailed on Sunday after a four day stay at Imperial Oil. 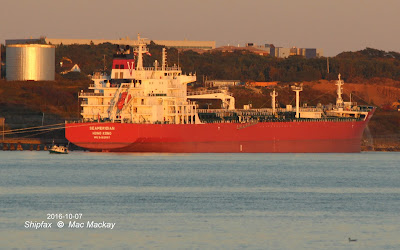 A product of Guangzhou International shipyard in 2011 it is a handysize of 30,241 grt, 50,309 dwt. If it is noteworthy, it is because it is owned and operated by Valles Steamship Canada Inc of Vancouver. Valles is a family owned business with roots in China, but which has been managed from Vancouver since 1995. See
vallesgroup.com

Among the several cruise ships, including Queen Mary 2 yesterday, was the first time caller Viking Star. The first ship in a trio for Viking Sea Cruises of Basel, Switzerland, it builds on the success of Viking River Cruises and their inland tour vessels. 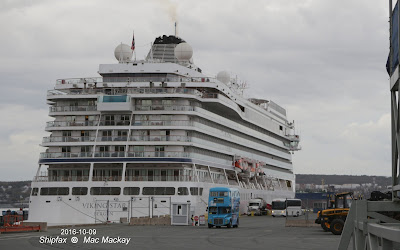 Tour buses and a fuel tank truck service Viking Star at pier 31. The ship arrived and sailed in darkness.

Yes,  but there is no connection unless it is  flattery by imitation. Royal Viking Line was founded in 1971 and  initially built three ships (in the same order of names as the new ones) in 1971-73. They were among the most luxurious cruise ships in the world at the time, but the line was merged into the Kloster group and went out of business in 1998.
Its three original ships are still sailing as Boudicca (ex Royal Viking Star) and Black Watch (ex Royal Viking Sky) for Fred Olsen and Albatros (ex Royal Viking Sea) for Phoenix Reisen. 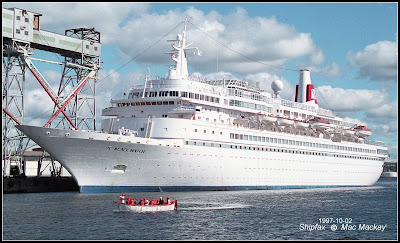 The former Royal Viking Star in Halifax as Black Watch.