The bulk carrier Saldanha Bay stopped in for bunkers en route from Jamaica. Named for a beautiful section of South African coast line, the ship is nevertheless owned by Nissen Kaiun Co Ltd of Japan. The ship was also built in Japan by Shikoku, Takamatsu. It is a member of the 100 ship plus Pacific Basin bulker fleet.

Unseasonable temperatures for the next few days mean that some recreational sailors are still enjoying their boats.

The 21,801 grt, 35,947 dwt ship dates from 2015.  It is likely loaded with alumina - the purified form of bauxite, the basic ore of aluminum. The Port Esquivel facility in Jamaica is a major producer of alumina. 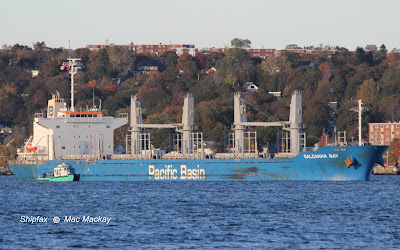 Dominion Diving's Halmar alongside the ship while at anchor, likely with agents or a technician.

Wilhlemsen's Tortugas got away from pier 27 this afternoon after arriving at Autoport yesterday, dropping off autos. It moved over to the Halifax side this morning. It normally would have used pier 30-31, but that berth was tied up by Hollandia unloading its nickel suflides cargo from Cuba. 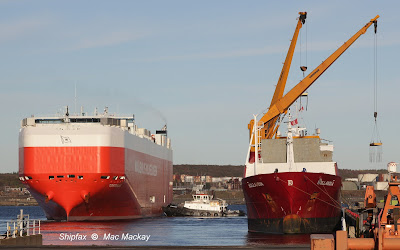 Tortugas unloaded some machinery, tractors and trucks that will be forwarded on from Halifax by road.
Built in 2006 by Mitsubishi, Nagasaki. Its 61,321 grt equates to a 6,354 car capacity. It is named for an extension of the Florida Keys in Gulf of Mexico, and as with all Wilhelmsen ships, its name begins with a "T". 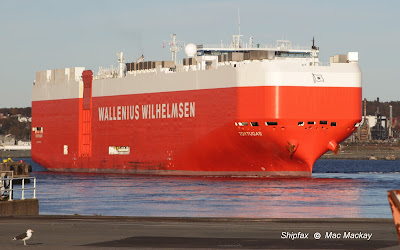 Also in port is the tanker Doric Pioneer. It arrived yesterday at Imperial Oil from Port Arthur, TX.