Some unusual ships called in Halifax during 1986, but perhaps the oddest was the former USS Brookings. It was built in 1944 by the California Shipbuilding Corp in Terminal Island, as a Haskell class attack transport APA-140 for the US Navy. 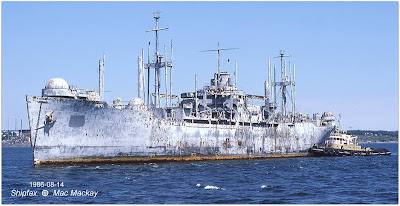 Point Vim nudges Brookings toward a pier after it arrived in tow.

Classed as a VC2-S-AP5, it was an offshoot of the standard Victory ships, but fitted out to carry 1500 troops and their equipment and land them with its own fleet of 25 small landing craft (LCVPs and LCMs).
It was also armed with a 5 inch gun and twelve 40 mm and ten 20 mm weapons

Commissioned in January 1945, the ship saw service in the Pacific including the occupation of Japan and troop landings in Korea and China. It was also used to repatriate troops to the US in late 1945 but was laid up in Norfolk in 1946 and decommissioned. It later became part of the National Defense Reserve Fleet in the James River, but was never used. 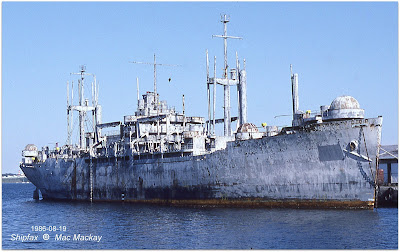 Alongside at pier 31, there is a very long pilot ladder positioned just aft of the superstructure to allow the tug crew to board the ship for berthing.

Brookings was returned to the USN as  a non-destructive target, and that is what brought it to Halifax in August 1986 in tow of the USN tug Apache. It only remained in port for two days before setting out again. Tugs had to exercise extreme care in getting away because the deck bitts were so badly rusted, they could not take much strain.
[n.b. Wikipedia says the ship was returned to the US Navy in November 1987, but it was clearly in USN control much earlier.] 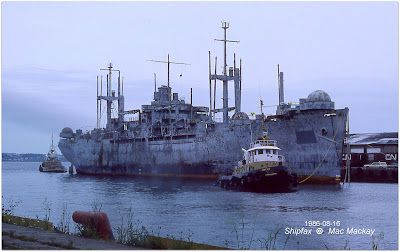 Point Vim and Point Vigour take it easy as the ship casts off at dusk. The heavy towing gear is rigged and ready on the bow.

Once clear of the pier the tugs took the ship out in the stream where Apache could take over the tow.

In September 1989 Hurricane Hugo blew the ship aground in Roosevelt Roads, Puerto Rico and it could not be refloated intact. Resolve Marine Group cut the ship down to refloat it and scuttled the hull offshore April 1, 1992. 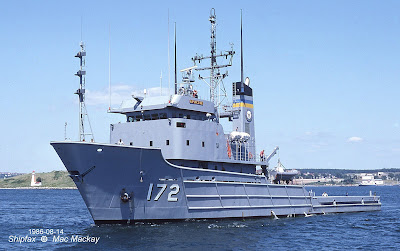 USNS Apache a Powhatan class ocean tug, T-ATF-172 dates from 1981 when it was built by Marinette Marine in Wisconsin. The 7200 bhp twin screw tug has a bollard pull of 87 tons and a top speed of 14.5 knots. It is still in USN service, and on October 31, 2015, using side scan sonar, located the wreck of the ship El Faro in 15,000 feet of water. The ship sank with all hands in Hurricane Joaquin October 2, 2015 while en route from Florida to Puerto Rico.