The breakers have them now

Two more ships with Halifax ties have gone to the breakers. One ship had recent a connection and the other went much farther back.

The latter one was known in its Halifax days as Len Speer and then Agile, but started life with a much different name and purpose.

Built in 1978 by Holming Oy of Rauma, Finland for Baltic Shipping of Russia, its original name was Stakhanovets Kotov. Essentially a barge carrier, it was equipped to flood its cargo deck and float on or off river barges. Using its pair of 350 tonne gantry cranes it could also lift heavy cargoes and stack barges. It could take RoRo cargo and had a 286 TEU capacity. To add to that it was also ice strengthened for Baltic and arctic service. It had two props, each with controllable pitch.

With the break up of the USSR, the Baltic Shipping Co was dismantled and in 1992 the ship was placed under Wijsmuller management with its fleet of heavy lift ships and barges, Stakhanovets Kotov was rated for 5500 tonnes capacity.

In 1996 the ship was arrested in Singapore and sold at auction. The ship arrived in Halifax the following summer in its more or less original condition, bearing the name Len Speer and registered in Barbados, and owned by Secunda Marine Services. 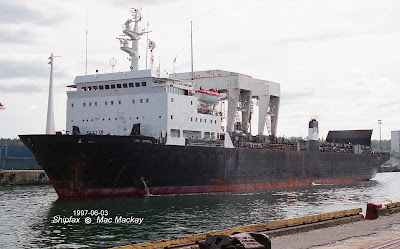 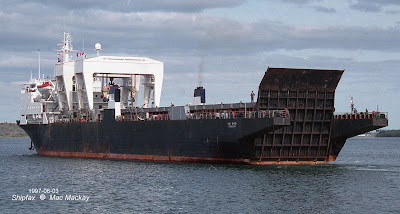 They had the ship refitted and converted to a cable layer, with the addition of shops and five cable tanks in the massive open cargo bay and two stern sheaves in a cut down stern ramp. Renamed Agile it was back in Halifax several times thereafter as it laid the last section of the 360 net cable. 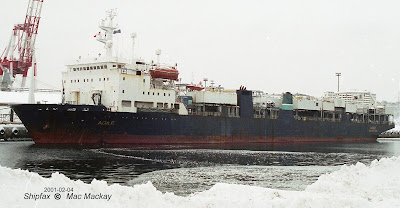 Agile was chartered to Cable + Wireless (Marine) Ltd for five years - a contract that was transferred to Global Marine Systems Ltd in 1999. The ship was renamed CS Agile for a time between 2003 and 2004.
At the end of the charter it returned to Halifax in late 2003 for further conversion by Allswater at Halifax Shipyard and pier 9c which extended for at least a year.

When Secunda Marine was sold to McDermott in 2007, the ship was assigned to McDermott International where it was further converted. Now with a forward high level helo pad, a large construction crane and other equipment for deep sea construction, pipe lay and cable lay it has accommodation for 112 workers.

Earlier this year Petrobras terminated a 5 year contract for Agile and in July the ship was sold to KNK Ship Management of Mumbai, and renamed  Gil under St.Kitts and Nevis flag. It then sailed from Brazil via South Africa to India where it was beached at Alang on September 22.

A ship that spent spring of 2015 in Halifax until a new rudder stock was fabricated has also arrived at Alang. Harefield was sailing from Wilmington to Baie-Comeau in mid-March when it damaged the rudder assembly in ice. It arrived in Halifax March 20, 2015 and tied up at pier 9c.

It was not until June 5 that the new part arrived. It took until June 20 for the installation to be completed and the ship could sail. 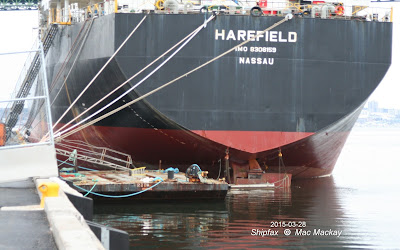 The rudder was trussed up to take the weight off the steering gear.

My observation at the time was that the ship, built in 1985, was certainly a very elderly vessel. However as a specialized carrier, with a pair of 35 tonne gantry cranes, fitted to carry paper and aluminum, it was expected to take a longer to pay off and was well maintained. 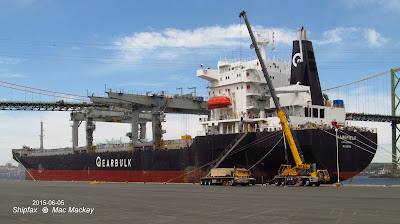 By the time the new component arrived the ship's travelling gantries were moved to allow the crew to paint the hatch coamings.

Built by Hyundai, Ulsan it ran for Gearbulk under the same name for its entire career. At 27,818 grt, 41,646 dwt the ship was also equipped to carry juice in special tanks.

It was not all work and no play for the crew however, as they did find time to use their improvised basketball net during off hours. 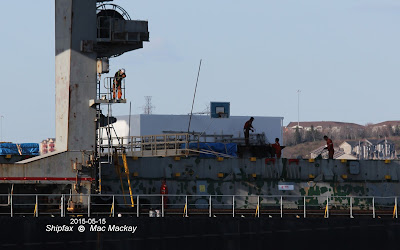 With several sectors of world shipping in a slump, a familiar name or two crops up every week. Bulk carriers and container ships lead the parade to the torch.