One of Irving's own tankers, Acadian inaugurated the facility, then surprisingly moved to Imperial Oil where it may have discharged some product - another surprise, since product exchange between the two companies was thought to be at and end.

Acadian sailed yesterday, but was back in port last night. It sailed again this afternoon after rectifying some problem with its exhaust system. All four of the (chartered) Irving tankers had exhaust gas scrubber systems installed, allowing them to meet new pollution regulations while still burning heavy fuel.

There was another tanker arrival today, but it was not to deliver or pick up cargo, Malmo docked at pier 27 to take on fuel delivered by truck. Not your typical product tanker, Malmo is smaller than most at 13,472 grt and 19,932 dwt, indicating that it is more likely to carry exotic chemicals. Its tanks are lined with an advance polymer coating called Marine Line 784, which permits it to carry food grade cargoes. 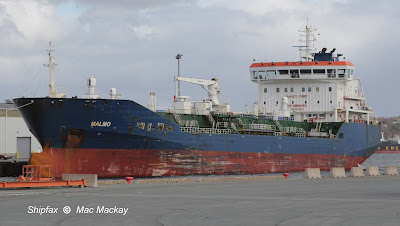 One of  series of similar ships built in 2008 by the Soli Shipyard in Kocaeli, Golucuk, Izmit, Turkey, it is operated by Empire Chemical Tankers of Piraeus and registered in Malta. Its last port was given as Paulsboro, NJ, one of the many refinery ports near Philadelphia. The ship appears to be in ballast, and this may be its last port before setting out on a transatlantic crossing.


The cruise ship Sirena was to sail this afternoon, but that has now been put off until midnight. High wind have apparently played havoc with the ship's schedule. In the interests of passenger comfort, they have decided to wait for better conditions.
Other ships may also have been delayed by weather. The autocarrier Tosca was due at Autoport today, but it has held off until tomorrow.

There was ConRo activity today, with ACL's veteran Atlantic Cartier arriving from Europe and the National Shipping Company of Saudi Arabia's Bahri Jazan arriving from Houston on its return toward home. The two ships passed each other in the Middle Ground area south of Point Pleasant. 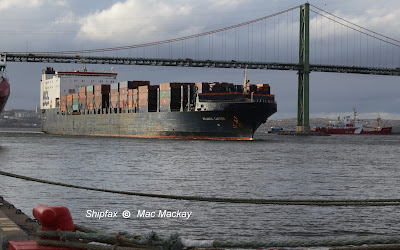 Atlantic Cartier has just cleared the MacKay bridge outbound and catches a last slant of sun. 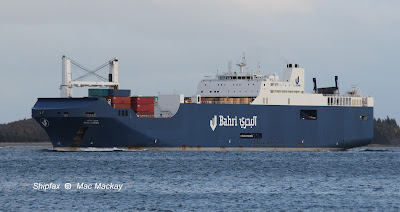