The Antigua and Barbuda flag general cargo ship Nordkap arrived at anchor this morning. It sails for HC Chartering of Hamburg and is a multi-purpose carrier, with box shaped holds and adjustable tween decks. The pontoons for those tween decks are not currently in use, and are lashed down on deck. That indicates a bulk cargo.
The 6170 grt, 77000dwt ship has a container capacity of 375 TEU, but can carry a wide variety of cargoes. It was built by Stocznia Gdanska in Poland in 2000.
The ship did not take bunkers, so it likely is in for some repairs on its trip from Barranquilla, Columbia. 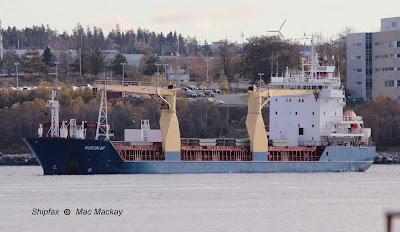 On its trip toward Halifax the ship likely crossed paths with another ship named Nordkap. That ship, flying the Danish flag, is a bulk carrier, frequently seen in these waters, as it regularly carries bauxite to La Baie (Port Alfred) QC. And is currently en route La Baie to Norfolk, VA. A much larger ship of 40,066 grt, 77,229 dwt, it has called in Halifax in the past for bunkers. See: Shipfax April 2011