Cruise ships were not as big a part of the Port of Halifax business in 1984. In fact the season was fairly short, ending October 1. There were only nine different ships, making about 33 visits. Ships were much smaller too, and some were veterans.

The Royal Viking pair Royal Viking Sky and Royal Viking Sea were both visitors in 1986. The stylish duo, which set the trend for modern cruisers, were built in 1972 and 1973 by O/Y Wartsila in Helsinki, but were lengthened 93 feet in 1983 increasing capacity from 750 to 848 passengers. The ships actually looked better after lengthening. 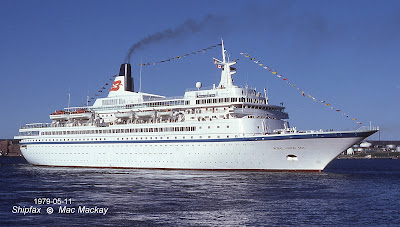 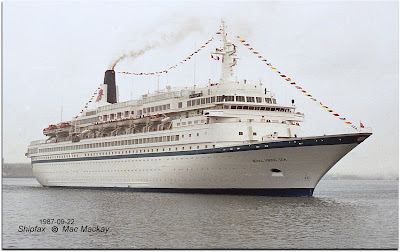 After many sales and renamings, both ships are still sailing, Royal Viking Sky as Boudicca and Royal Viking Sea as Albatros. The latter called here in 2015. 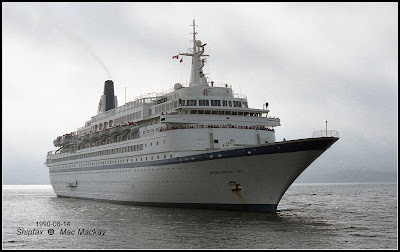 This remarkable ship was built in 1952 by Wilton-Fijenoord, Schiedam, Netherlands for the Holland America Line. Launched as Diemerdijk it was wisely renamed Maasdam and began a 35 year career as a transatlantic liner. Fitted with GE steam turbines, which were World War II surplus,  it brought many Dutch immigrants to Canada, as its normal route was Rotterdam / Montreal / New York. From 1960 it ran from Rotterdam / Montreal, making its last trip in 1968.
In 1969 it was sold to the Polish government and renamed Stefan Batory and in April began its service from Gydnia via Copenhagen and Quebec City to Montreal. It would also call in Halifax from time to time and made one call in July 1986.
It made its last sailing from Montreal in 1987 and was the last steamship on a regularly scheduled North Atlantic service. 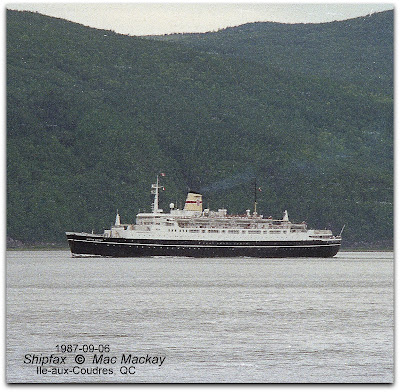 In its last year of service as a transatlantic liner, Stefan Batory makes its way up the St.Lawrence River.
After some short term service in the summer of 1988 it was sold to Greek owners in November 1988 and renamed Stefan. Under Stena management it served as a refugee hostel in Gothenburg, and moved on the Greece in 1991. It arrived in Alang in March 2000 where it was broken up.

Another steam turbine veteran of the 1950s was Stella Solaris. However it was built as a passenger cargo vessel by Atelier + Chantier de France, Dunkerque as Cambodge. It served Cie des Messageries Maritimes until 1970 when it was converted to a cruise ship with 329 cabins and 660 berths. 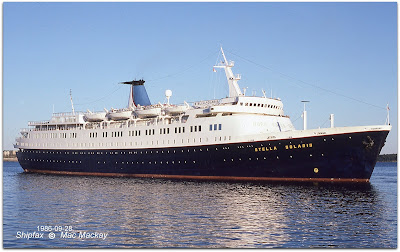 A stylish conversion, Stella Solaris looked more like a liner than a cruise ship with its high lifeboats and closed decks.

The ship was sold for scrap in 2003 and under the name S Solar made its way to Alang, arriving December 11.

Called Veracruz Primero, this ship was a regular caller in Halifax, but 1986 was its last year to visit here.
Dating from 1957, it was another steam turbine vessel, built as Theodor Herzl for Zim Israel Navigation Co Ltd of Haifa with a sister ship Jerusalem. Initially for Mediterranean liner service between Israel, Greece and Italy, it had cargo holds fore and aft, but became a cruise ship in  1965. It last sailed for Zim 1969.
Sold and renamed Carnivale it was to be the first ship in the Carnival  Cruise line, but was not converted and remained laid up until 1975 when it was sold again and renamed Freeport. Extensively rebuilt as a cruise ship, it was given a more modern appearance with a new funnel wing, and enclosed side alleys.

With a mix of traditional and modern flourishes Veracruz I was a solid looking ship.
With a passenger capacity of 800 the ship was a regular in Halifax until 1986. It was then transferred to the Caribbean and in 1990 was sold and renamed  Sun Ambassador and in 1991 Fiesta. At that time it was in Piraeus for another major refit, but on October 14, 1991 it caught fire. The ship sank due to ingress of water from firefighting and was a total loss. It was later broken up in place.

The last ship of the season arrived on October 2. Unlike recent years, when October is the peak season, Illiria was also the only ship to call in that month.
Built in 1972 by Cantieri Navali Pellegrini, Naples for Adriatic service as a cargo / passenger ship it had  accommodation for 181.  In 1977 it was converted for 135 passengers for Greek owners. 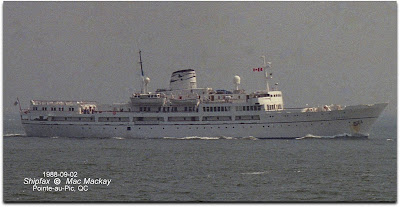 Illiria sails smartly up the St.Lawrence in 1988.

In 1986 New Frontier Cruise Lines Ltd of Greece acquired the ship and ran it until 1988. It was then acquired by the unusually named First Security Bank of Utah N.A. and reflagged to Liberia.
It became Bali Sea Dancer in 1994 working out of Singapore and in 1998 it moved to South America.
As Galapogos Discovery it hoisted the Ecuador flag but it was a short tenure.
On October 19, 1999 it caught fire at Balboa and sank the next day. It was later raised and towed out to sea and scuttled February 28, 2002.

Dating from 1967 this was one of the early ships built strictly for cruising. Originally named Italia, its owners and builders went broke during construction, but it was completed for Costa Armatore. Working in the Mediterranean and the US west coast it was unofficially named Princess Italia until 1983 when it was sold and renamed Ocean Princess. 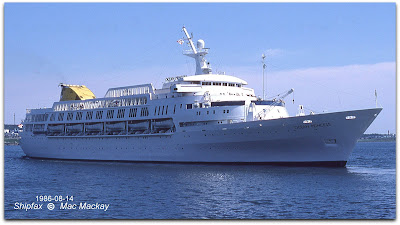 With engines aft to increase valuable mid-ships passenger space, the ship had a very unstylish finnel.

In March 1993 while cruising the Amazon it struck a submerged wreck and sank near Belem. Passengers and crew got off safely, but the engine room was flooded and the ship was declared a constructive total loss.
It was rebuilt as Sea Prince but in 1995 suffered a fire and was sold again, breifly as Sea Prince V then Princesa Oceanica for Louis Cruises. It was renamed Sapphire in 1996 for a Thomson charter.
In 2010 the ship was laid up because it did not comply with the new SOLAS regulations, and in 2012 under the name Aspire it made its way to Alang where it was beached May 11 and broken up.

For the record, the other callers were Royal Odyssey and Sea Goddess II, both of which managed to elude my camera.