The tanker Energy Panther took up an unusual position in the harbour today. Ships at anchor are normally oriented with the bows in the northeasterly direction. However with a weather system building in today the winds have backed round and the ship is positioned with its bow in a southerly direction. It also appears to be much closer the Halifax side of the harbor, but that may be as much my height of view, and the scope on the anchor cable. 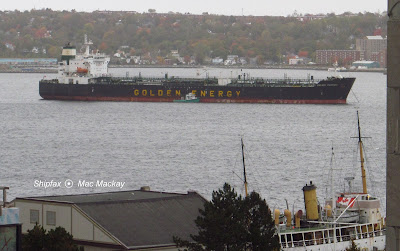 Dominion Diving's Halmar is alongside and the Maritime Museum's Acadia is in the foreground.


Energy Panther is a typical Korean built mid-range tanker of 29,494 grt, 46,610 dwt. However it was built in 2008 at the little known Sungdong Ship Building + Engineering of Tongyoung. The ship is managed by Enterprises Shipping + Trading SA of Athens, but owned and registered on the Isle of Man. It is part of the Golden Energy pool of tankers.


It arrived from Ijmuiden, Netherlands.